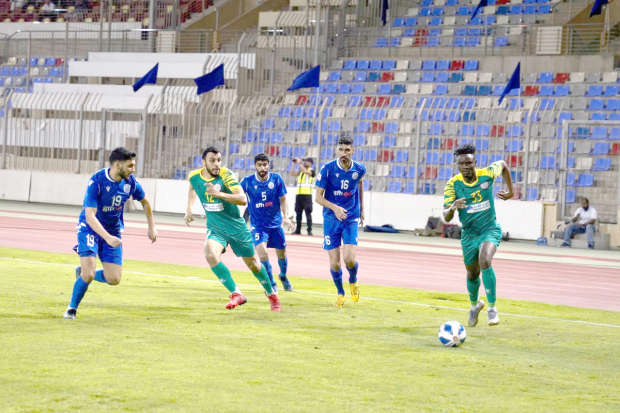 Hidd and Malkiya players battle for the ball. Picture by HUSSAIN ALMOSAWI

Hidd have sealed their place in next season’s Nasser Bin Hamad Premier League after a 3-1 win over Malkiya last night at the Khalifa Sports City Stadium.

Following Budaiya’s 1-1 draw with Sitra, Hidd have moved to first place in the relegation playoffs, confirming their place in next season’s Premier League with one match to go.

Malkiya opened the scoring in the fourth minute through a great goal from Dominic Sandy, whose shot from just outside the penalty box found its way into the top corner, just out of reach of the Hidd goalkeeper.

Hidd almost equalised in the 13th minute, but a header went just wide of the post. Malkiya almost immediately had the chance to double their lead, only for the shot to go wide as well.

Hidd continued to push for an equaliser and their efforts paid off in the 16th minute. Tarek Khada headed in a cross from the left to level the score at 1-1.

Hidd had a chance to take the lead two minutes later, but a volley from outside the box went flying just over the crossbar.

Hidd soon started taking control of the game, and continued to look for a second goal, and their persistence was rewarded with a goal in the 33rd minute. Talal Al Shurowqi capped off a great play to put his team ahead 2-1 just after the half hour mark. He was then booked for taking his shirt off while celebrating the goal.

Al Shurowqi doubled his tally for the night, scoring a header from a corner to double his team’s lead to 3-1 just before half time.

Hidd came into the second half looking to pick up where they left off. They had a chance to score a fourth goal in the 50th minute, but the shot went wide.

Hidd put up a strong defensive performance in the second half, frustrating Malkiya and limiting them to just two shots in the period.

Malkiya’s best chance to score came in the 81st minute, but a strong shot went wide of the post.

Hidd controlled the rest of the game, and the second half finished just as the first did, 3-1 in favour of Hidd.

Malkiya are now in a must-win situation in their match against Sitra on Saturday, as they are bottom of the group and facing the prospect of another season in the Second Division. Sitra, who have two points after two draws, will now need one point to be promoted to the top division next season.