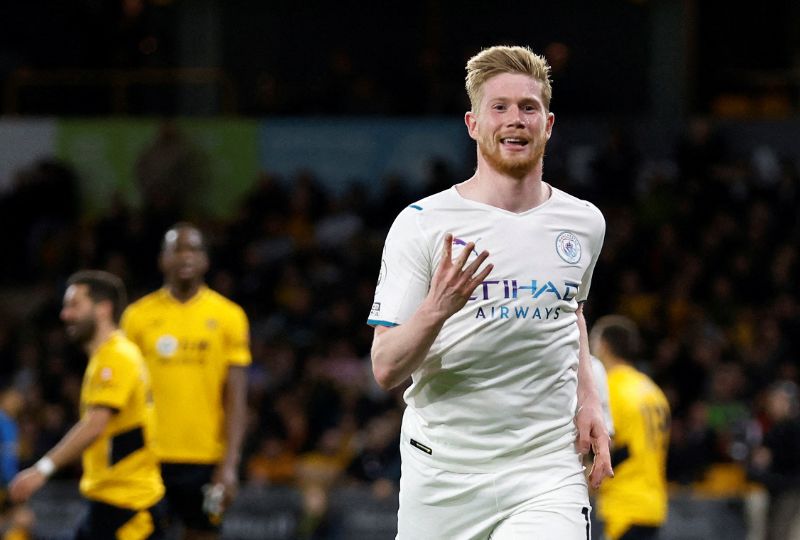 After a scintillating hat-trick on Wednesday to put Manchester City within touching distance of another Premier League title, Kevin De Bruyne celebrated with a meditation pose made famous by Norwegian striker Erling Haaland.

As if De Bruyne's own performance against Wolverhampton Wanderers, scoring four in a 5-1 rout, was not scary enough, his reminder of Haaland's imminent arrival to the Etihad Stadium was a further intimidating signal to opponents.

"I just did it because I scored three. That never happens," De Bruyne said.

But the symbolism was clear.

Manchester City will be hoping that goal machine Haaland's planned July 1 transfer from Borussia Dortmund not only cements their status at the top of the Premier League but will also bring an elusive Champions League trophy.

"It's a good signing for the future. He comes for many, many years hopefully. And I'm pretty sure he will adapt perfectly," Manchester City manger Pep Guardiola said of Haaland after the win against Wolves.

"He's an incredible young talent with a perfect age. I'm pretty sure we are going to have him to settle as best as possible."

Haaland, 21, has scored 85 goals in 88 games for Dortmund since his debut in January 2020. He was last season's top scorer in the Champions League as well as the UEFA Nations League.

Before welcoming him, however, Guardiola has a Premier League to win. His team are now three points ahead of Liverpool and on a superior goal difference, with two games remaining.

With De Bruyne driving them forward, it is hard to see Manchester City falling at the final hurdle.

"Unstoppable, brilliant, awesome, outstanding, perfect," said Guardiola. "He had the ability to create the special things.

"Always we push him. He is an incredible player, generous with assists, but he has to score goals and this season is the most prolific he has had since we are together."

Though elated at his four-goal haul at Molineux, De Bruyne opened up on the pain Manchester City felt last week when Real Madrid pipped them 6-5 on aggregate in the Champions League semi-final with late goals in the second leg.

"It's very difficult to explain. It was just a mad five minutes," he said. "I don’t know what happened ... It was a bit of a shock. You need to move on, we need to win the (Premier League) title, and move on."