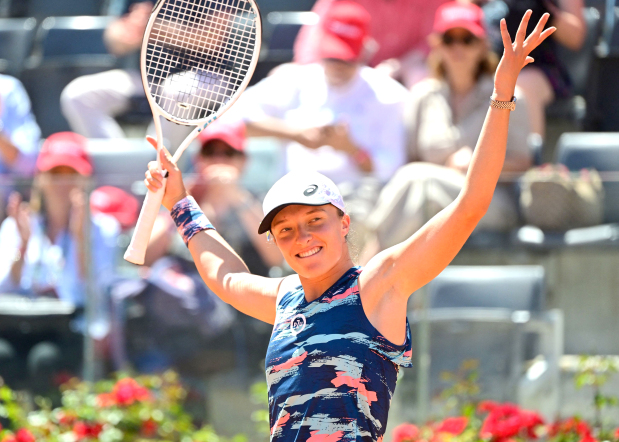 ROME: World number one Iga Swiatek swept aside third-seeded Aryna Sabalenka 6-2, 6-1 in a lopsided contest in Rome yesterday to advance to an Italian Open final against Ons Jabeur.

Swiatek extended her winning run to 27 matches, matching the tally set by Serena Williams in 2015, as she outclassed Sabalenka in just over an hour to reach her fifth consecutive WTA final.

“I’m just constantly surprising myself that I can do better and better,” Poland’s Swiatek said.

“I feel like I actually can believe now that the sky’s the limit. That’s the fun part, for sure.”

World number eight Sabalenka, who won only two of her service games, received a medical timeout at 4-1 down but it only delayed the inevitable.

Swiatek will take on Tunisia’s Jabeur in today’s final after she beat Daria Kasatkina 6-4, 1-6, 7-5 to claim her 11th victory on the bounce having won her first WTA 1000 title in Madrid last week.