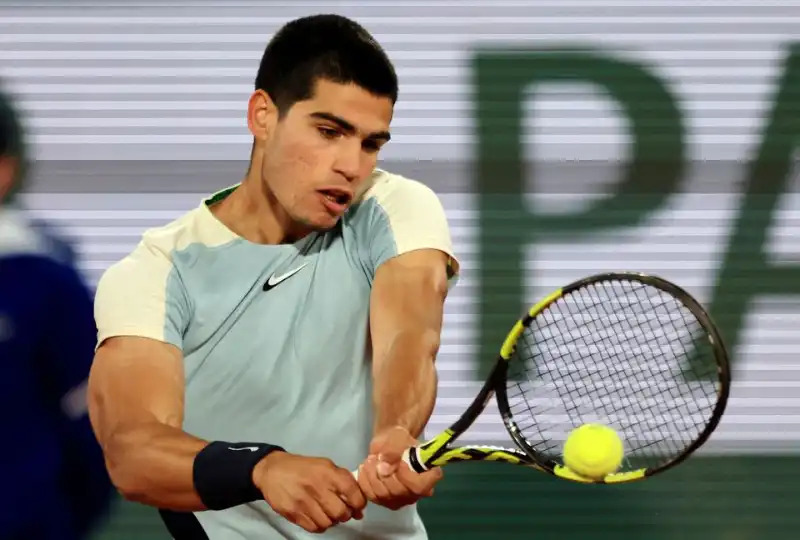 Spain's Carlos Alcaraz in action during his fourth round match against Russia's Karen Khachanov. (Reuters Photo)

PARIS - Carlos Alcaraz pummelled Karen Khachanov into submission in a 6-1 6-4 6-4 victory on Sunday to reach the French Open quarter-finals and stretch his winning run to 14 matches.

The 19-year-old, who has taken the tennis world by storm this year, became the youngest male player in 29 years to reach two Grand Slam quarter-finals after also making the U.S. Open last eight.

"I expected the level that I played. I started really well and I kept the level for the whole match. I am very happy with it."

He needed just 29 minutes to storm through the first set with his special mix of raw power, punishing forehands and deft drop shots that made his 26-year-old opponent look old.

Khachanov, the world number 25 and a quarter-finalist in Paris in 2019, managed to hold serve early in the second set but the Spaniard broke him at 3-3, and never looked back.

The pair traded breaks midway through the third set on a chilly and overcast evening in the French capital but it was Alcaraz who pulled ahead with yet another break after an eye-popping 'tweener' lob over the tall Russian.

He wobbled a bit at the end, wasting five match points on Khachanov's serve, but that only delayed the inevitable by one game, as he sealed victory on his serve minutes later.

World number six Alcaraz, who now has a 19-1 win-loss record on clay this season after winning back-to-back titles in Barcelona and Madrid in April and May, will next face third seed Alexander Zverev, who beat qualifier Bernabe Zapata Miralles in straight sets.

"Sasha (Zverev) is playing a great game. He is real aggressive and it will be a tough match," Alcaraz said. "Best of five against him will be tough. He has beaten great players in Grand Slams."

"I like to play tough, close matches so it is going to be a good match."

Should the stars align for Alcaraz, he could eventually take on either world number one and defending champion Novak Djokovic or 13-time Roland Garros winner Rafael Nadal in the last four.