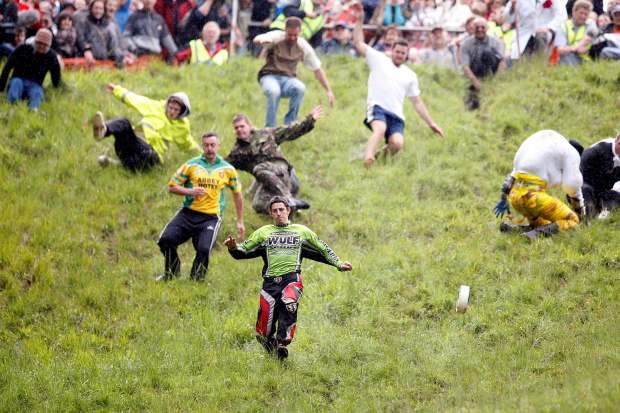 LONDON - After a two-year absence the sight of people tumbling head over heels down a grassy slope in pursuit of a runaway cheese returns this week to the picturesque English village of Brockworth.

As extreme sports go, there are few as curious, or bruising, as Cheese Rolling -- an event that was first recorded in 1826 and which has become part of Gloucestershire folklore.

On Sunday, thousands of spectators will perch themselves on Coopers Hill, just outside Gloucester, to watch the action -- which basically involves contestants running and tumbling after a 4kg round of Double Gloucester cheese released by the starter at the top of the 200 metre slope featuring 50% gradients.

Inevitably the cheese, which reaches speeds of 70mph, wins the race, but the prize goes to the first person to make it down to the bottom of the hill.

Staying upright is almost impossible and the sight of bodies flying through the air like rag dolls is all part of the attraction for those watching.

Members of the local Brockworth Rugby Club work as "catchers" on the day, positioning themselves at the bottom to save those who are out of control in pursuit of the cheese.

Bumps and bruises are par for the course for those taking part and the local St John Ambulance brigade are kept busy patching up the injured at the bottom.

Local favourite Max McDougall won the men's race in 2019 -- a year after knocking himself out on the course -- but the Covid-19 pandemic meant he has been unable to defend his crown.

The event has not been without controversy with the injury toll attracting criticism while in 2013 a fake cheese was used after fears the real round could endanger the crowd.

This year's eagerly-awaited Cheese Rolling features three men's races and a women's race. A children's event is also included although for safety reasons they race up hill rather than down.

To add to the event's unique charm, the winner gets to eat the trophy -- a huge hunk of Double Gloucester.