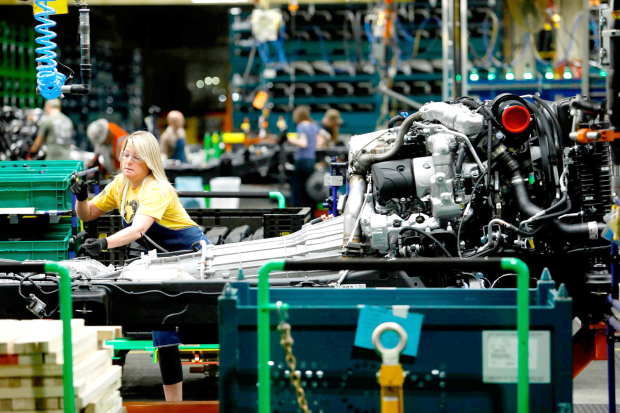 From the US to the euro zone, activity at factories slowed to levels last seen during the initial wave of the pandemic. They were the latest signs pointing to the risk of all-out recession in the global economy, coming after the world’s top chipmakers said they were facing waning demand and as central bankers warned of painful interest rate increases ahead.

The slowdown in the US was accompanied by declines in new orders and employment. The Institute for Supply Management’s index of national factory activity dropped to 53.0 last month, the lowest reading since June 2020, from 56.1 in May. Its measure of new orders contracted for the first time in two years, while employment remained weak.

The picture was equally gloomy in the euro zone, where manufacturing output also slowed. S&P Global’s manufacturing Purchasing Managers’ Index (PMI) fell to 52.1 in June from May’s 54.6, its lowest level since August 2020.

“We doubt the outlook for manufacturing will improve any time soon,” said Andrew Hunter, a senior US economist at Capital Economics. “While the latest PMI surveys from China suggest manufacturing activity there is rebounding rapidly as lockdowns are lifted, that acceleration is unlikely to be sustained.”

Earlier, surveys showed China’s factory activity recovering in June, though a slowdown in Japan and South Korea, as well as a contraction in Taiwan, highlighted the strain from supply disruptions, rising costs and persistent material shortages.

At a meeting of central bank chiefs in Portugal this week, Federal Reserve chair Jerome Powell and European Central Bank president Christine Lagarde made it clear that bringing down high inflation could hurt badly but must be done quickly to prevent rapid price growth from becoming entrenched.

Evidence from the real economy suggests that higher prices are already biting into consumer and corporate demand.

Micron Technology sounded the latest warning from the world’s chipmakers, forecasting worse-than-expected revenue for the current quarter, noting that the market had “weakened considerably in a very short period of time.”

“If I had to bet, I’d say that this might be one of the worst downturns that we’ve seen in recent history,” Zuckerberg told workers in a weekly employee Q&A session.

Economists last month found there is a 40pc chance of a recession in the US over the next two years, with a 25pc chance of it happening in the coming year.

“There’s hope China’s economy will pick up after a period of some weakness. But now there’s a risk of slowdown in the US and European economies,” said Yoshiki Shinke, chief economist at Japan’s Dai-ichi Life Research Institute.

“It will be a tug of war between the two, though there’s a lot of uncertainty over the global economic outlook.”

China’s Caixin/Markit manufacturing PMI rose to 51.7, marking the first expansion in four months and well above analysts’ expectations for a reading of 50.1.

China’s economy has started to chart a recovery path out of the supply shocks caused by its strict lockdowns, though risks remain such as diminished consumer spending and fear of a further wave of infections.

Meanwhile, the final au Jibun Bank Japan Manufacturing PMI slipped to 52.7 in June from 53.3 in the previous month.

Separate data showed South Korean exports, seen as a proxy for global trade because its manufacturers are positioned in many parts of the world supply chain, growing at their slowest pace in 19 months.