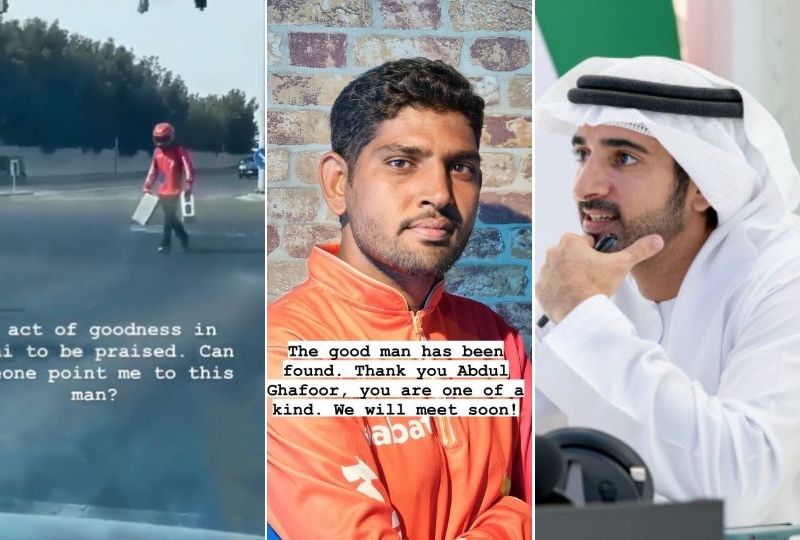 A Pakistani delivery rider received a phone call from Dubai Crown Prince on Sunday after a video of his heroic act caught the attention of Shaikh Hamdan bin Mohammed.

The video which has since gone viral shows Abdul Ghafoor Abdul Hakeem removing two fallen concrete bricks from the middle of a busy traffic junction and placing them safely to the side of the road.

A video of his selfless act prompted Shaikh Hamdan bin Mohammed bin Rashid Al Maktoum to seek help from his millions of social media followers to identify the Good Samaritan.

An act of goodness in Dubai to be praised. Can someone point me to this man? pic.twitter.com/clEIWQQe3A

“An act of goodness in Dubai to be praised. Can someone point me to this man?” read the story posted to Shaikh Hamdan’s Instagram account.

He later posted that the “good man” had been found. “Thank you, Abdul Ghafoor, you are one of a kind. We will meet soon!”

An act of goodness in Dubai to be praised. Can someone point me to this man? pic.twitter.com/clEIWQQe3A

The delivery rider received a call from the Dubai Police confirming his identity and informing him that the Dubai Crown Prince would like to speak to him, minutes after Shaikh Hamdan posted the video.

“To be honest, I’m still in disbelief that the Shaikh wanted to speak to a common man like me,” Abdul Hakeem told Khaleej Times.

“He is really a great leader.”

The 25-year-old said he was spurred into action when he saw a taxi driver almost lose control while driving over the bricks. He proceeded to remove the fallen bricks and went on to make his delivery on time.

Talabat has rewarded his heroic act by giving him a flight ticket to visit his home so he could spend time with his son.