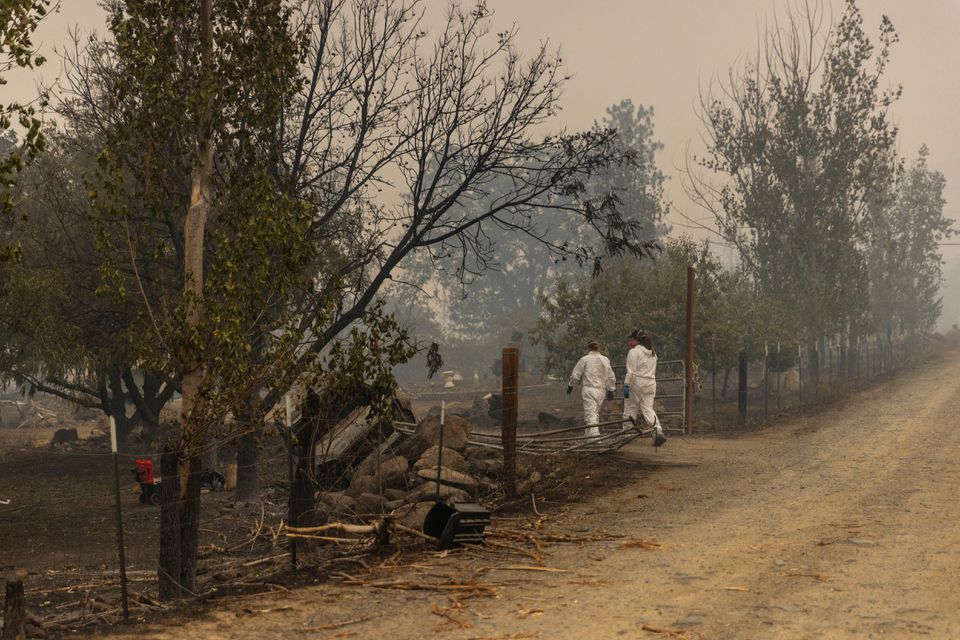 Forensic anthropologists walk into a property to look for human remains in a damaged vehicle as the McKinney Fire burns near Yreka, California, U.S., August 1, 2022. (Reuters Photo)

YREKA - Search teams have located two more bodies in an area scorched by a forest fire raging for a fifth day in northern California near the Oregon border, bringing to four the number of lives lost in the state's biggest blaze this year, officials said on Tuesday.

The latest two victims were found on Monday at separate homes along a highway that runs through the fire zone in the Klamath National Forest about 483 km north of San Francisco, according to a statement issued by the Siskiyou County Sheriff's Office.

The remains of two other people, who were apparently trying to escape the fire at the last minute, were discovered on Sunday inside a burned-out car that ran off the driveway of another home along the same highway, sheriff's officials said on Monday.

Authorities said no further information would be released on any of the deaths until positive identification is made and the next of kin have been notified.

Since erupting on Friday, the so-called McKinney fire has charred more than 56,000 acres (22,662 hectares) of drought-parched timber, tall grass and brush, fire officials said on Tuesday.

Roughly 4,500 people were under evacuation orders as of Tuesday, sheriff's spokesperson Courtney Kreider said, adding that an estimated 100 structures, from sheds to houses, have gone up in flames.

The unincorporated riverfront enclave of Klamath River, with a population of fewer than 200 residents, was especially hard hit, losing numerous homes and its community center to the fire, Kreider said.

Nearly 5,000 dwellings countywide were listed as threatened by flames.

The doubling of the death toll came after a night of relatively mild fire growth compared with previous nights. High humidity levels helped tamp down the flames while crews made progress carving buffer lines to protect communities on the edge of the fire zone, Dennis Burns, a fire behavior analyst for the incident management team, told a morning briefing.

Much of the effort was focused on the outskirts of Yreka, the Siskiyou County seat and former Gold Rush town now home to 7,800 residents.

Burns said thunderstorms in the forecast may bring welcome rainfall to the area, or erratic winds that could fan the flames anew, as well as possible lightning strikes that might ignite further fires.

The cause of the McKinney blaze was under investigation.

The fire erupted amid record-breaking heat in a region where drought-desiccated trees and undergrowth had already created a highly combustible fuel bed, in keeping with extreme conditions scientists ascribe to human-induced climate change.