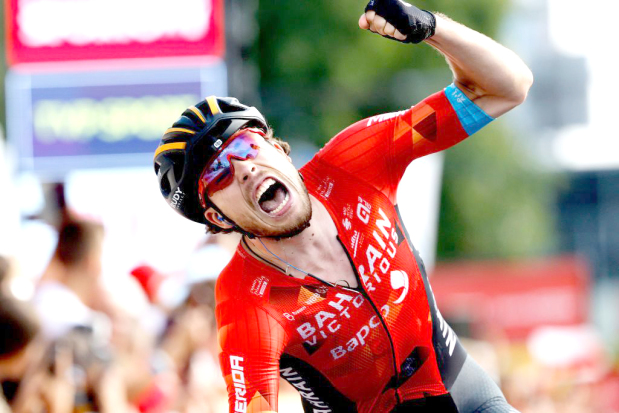 After top three results for Bahrain Victorious in each and every stage so far, Phil Bauhaus capped off an extraordinary day and week of teamwork at the Tour de Pologne, raising his arms in triumph after the stage 5 victory.

Behind him, Jonathan Milan, who had led him into the perfect position to launch his sprint, roared with delight as the German crossed the line ahead of Arnaud Démare (GFC) and Nikias Ardnt (DSM).

It is the 28-year-old’s 19th career win and a second at this race after stage 1 last year. After the stage, he acknowledged his strong form and paid tribute to his teammates.

In a bunch sprint, it’s not always about having the best legs; it’s also about the team, tactics, and timing. I was second on day 1, and I’ve proved this year I’m one of the best sprinters in the world, so the team and I have always been confident that I can win a lot of races at World Tour level. It was just a matter of time before I won again,” said Bauhaus.

Bahrain had ridden at the head of the peloton all day, calmly bringing back an eight-man breakaway over the 178 westbound kilometres from Lańcut, as the race heads back towards Kraków. And once all the riders were back together with 3k left, Bahrain were still four-strong.

Under the ‘flamme rouge’ it was Bauhaus and Milan vs Démare and Guarnieri. The Groupama-FDJ pair pulled for as long as they could before Bahrain’s red and orange jerseys left them behind. The Italian looked over his shoulder to check his teammate was on his wheel, then pulled off, leaving Bahrain sprint king to finish the job in style. He led from the front and finished in front.

Bauhaus said after receiving his trophy on the podium that the race isn’t over yet.

“Now we hope our GC guys can do a good time trial tomorrow, and then on the last day, we expect another bunch sprint. My legs are good, I’m in great condition and I’m in one of the best teams in the world; we’ve proved that together as a team, we can win a lot of races, so I’ll hope to get another result in Krakow,” he said.

Meanwhile in Spain, the team came through a crash marred finish on stage 2 of Vuelta a Burgos, and Santiago Buitrago defended his lead in General Classification.