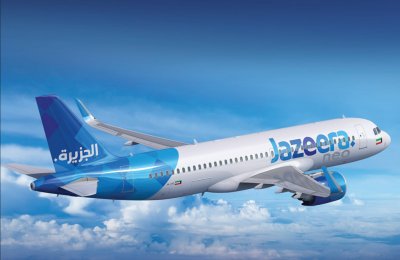 The upcoming service on Mondays, Wednesdays, Fridays and Sundays to Prince Nayef Bin Abdulaziz International Airport follows the success of the previously launched routes to Hail and Abha during the month of July. The airline operates seven routes to Saudi, including Riyadh, Jeddah, Dammam and Madinah.

Jazeera Airways Chief Executive Officer, Rohit Ramachandran, said: “Demand for flights to Saudi Arabia has really grown and we’re pleased to offer more choice to the Kingdom for Kuwaiti travellers. The momentum is expected to continue as events and festivals resume in the Kingdom for the cooler months. There are strong ties between Kuwaiti and Saudi families and we now offer a flight for them to connect rather than take to the highway.”

With over 60 flights a week now being offered, Jazeera is the number one airline from Kuwait. Jazeera is also working closely with the Saudi Tourism Authority to support the marketing of their event calendar in the Kuwait market to attract travellers.

One of Saudi’s 13 provinces, the Qassim region is known for its wheat and its dates, which are popular throughout the country and earned the region the “food basket” naming in the country.

The region has a relatively rich agriculture, growing most crops including grapes, oranges, lemons, grapefruit, mandarin oranges, pomegranates and other vegetables.

Buraydah in the province’s capital city which is inhabited by approximately 60% of the region’s total population. The capital hosts at the end of the summer the annual Buraydah Date Festival, a 35-day event which draws farmers and tourists from neighboring regions and countries every year to sell dates and date by-products. – TradeArabia News Service