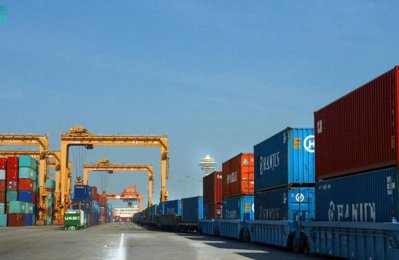 The King Abdulaziz Port in Dammam, managed by Saudi Global Ports (SGP), has set a new container throughput record by handling 188,578 TEUs during June 2022, surpassing the previous record set in 2015 by 867 TEUs.

The record-breaking performance comes on the back of soaring import and export volumes, which boosted the port’s productivity while reaffirming its unique operational and logistical prowess in line with the objectives of the National Transport and Logistics Strategy (NTLS) to raise logistical output and boost container throughput in Saudi ports, reported Saudi Press Agency (SPA).

The port’s strategic location on the Arabian Gulf lends it a distinct status as a trade gateway to the Kingdom’s Eastern and Central regions, which provides investors interested in setting up integrated logistics facilities that offer value-added services a competitive edge like no other.

The Dammam-based port had re-engineered its transshipment handling processes during 2021 alongside launching new transshipment services to connect with ports in the GCC and East Asia. These initiatives brought about a 142.72% growth in transshipments compared to the previous year.

The Saudi Ports Authority (Mawani) is currently working on upgrading the 19 sq. km. port to offer world-class services across its 43 berths that are capable of receiving giant vessels and handling up to 105 million tons annually.

Connected by rail to Riyadh’s Dry Port, King Abdulaziz Port in Dammam operates with state-of-the-art handling equipment which can process all kinds of cargo. It is also home to a container terminal, two general cargo terminals, ancillary terminals, and a ship repair yard that includes two floating docks capable of accommodating vessels up to 215-metre long.