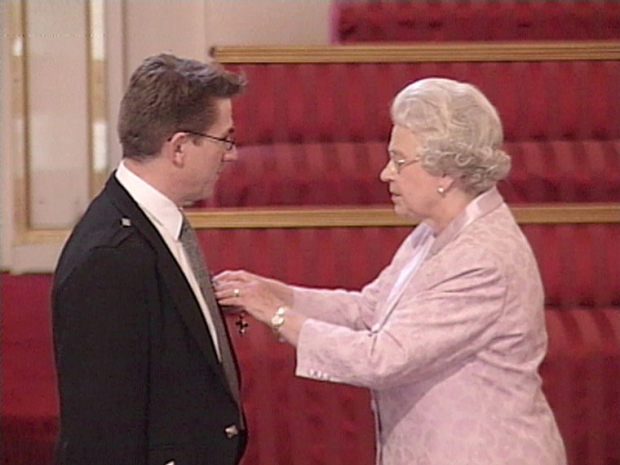 Mr Lindsay being honoured by the Queen

I am most grateful to the Gulf Daily News for giving me the opportunity to say a few words about Her Late Majesty Queen Elizabeth II, in particular the several occasions when I was fortunate enough to meet her.

Let me first express my deepest condolences to His Majesty King Charles III, the Queen Consort and other members of the Royal Family upon their loss. Our thoughts are with them.

Let me also add that it was the greatest honour of my life to serve the Queen. As many have already acknowledged, she was a model of duty and devotion to her country, her other realms and the Commonwealth.

I first met Her Late Majesty at Buckingham Palace when she presented me with an OBE in June 2003, for ‘services to operations in Afghanistan’, which at the time rather sounded as though they were ‘special’ operations.

I could not help but wonder what the hundreds of guests of the other recipients of honours were thinking when my citation was read out. It was a nerve-wracking experience waiting to receive the honour, not least as I was the last person in line that day. But the Queen immediately put me at ease, as she always did with people she met. She asked kindly whether I had been in Afghanistan. I replied that I had not as I had just had my tonsils removed and the medical advice was that I should not go. She found that amusing! I then added quickly that I had been responsible for Afghanistan in the Foreign and Commonwealth Office and had spent three months working in a bunker underneath the FCO following the terrible events of 9/11. So, just one minute of conversation with the Queen but I was on cloud nine!

It was eight years later, in 2011, when I next met her, with my wife Bridget, prior to my arrival in Bahrain as Her Late Majesty’s Ambassador. It is a tradition that British ambassadors and high commissioners meet the Sovereign after their appointment has been announced and, usually but not always, prior to their departure overseas in a ceremony known as ‘kissing hands’, although there is no kissing of hands as such! This took place at Buckingham Palace.

We were, understandably, nervous given that this was a far more personal encounter for me and my wife had never met the Queen. My abiding memories of that first private discussion were how much she knew about Bahrain, her high regard and personal warmth for His Majesty King Hamad and his family and how she put us completely at ease.

The next occasion when we met privately was in 2016, again for ‘kissing hands’, in this case a few months after I had arrived in Budapest to take up my appointment as Her Majesty’s Ambassador to Hungary. By this time, the Queen was 90 years old, but she was as engaging and as charming as ever and, again, had what seemed to be an encyclopaedic knowledge of, in this case, Hungary and the UK’s historic relationship with the country.

Incidentally, did you know that the Queen was 1/16th Hungarian? Her great great grandmother, Countess Klaudia Rhédey, was born in Erdély, in what is now Romania. On a lighter note, there was an amusing moment during that audience when the Queen complained affectionately that one of her beloved corgis was getting under her feet!

While I was serving as British Ambassador to Bahrain and latterly, I was on a number of occasions kindly invited by His Majesty King Hamad to the Royal Windsor Horse Show, widely considered to be Her Late Majesty’s favourite event and one which His Majesty has generously supported. On the Friday of the show, the Endurance Race is held in Windsor Great Park, in which His Highness Shaikh Nasser bin Hamad Al Khalifa and the Bahraini team participate, usually with great success! After the race, the Queen would often visit the Bahraini pavilion and meet His Majesty and his guests. It was then that it became clear to me that she and His Majesty had a special bond and were close friends.

My thoughts are therefore also with His Majesty and other members of his family at this sad time. They will be feeling the same sense of deep loss as the rest of us.

I last saw Her Late Majesty at the Royal Windsor Horse Show last year. She looked as lovely as ever and was clearly delighted, after the hiatus of 2020, to again be able to be among her people, sharing their happiness. It is a moment which I will never forget.

In 1947, on her 21st birthday, when she was visiting South Africa, Her Late Majesty said, “I declare before you all that my whole life whether, it be long or short, shall be devoted to your service…”.

I, and I am sure all of us, thank the Queen for her unstinting devotion to the United Kingdom, her other realms and the Commonwealth.

God Save The King!

● Iain Lindsay, OBE, former British Ambassador and adviser to the chairman of the Bahrain Economic Development Board