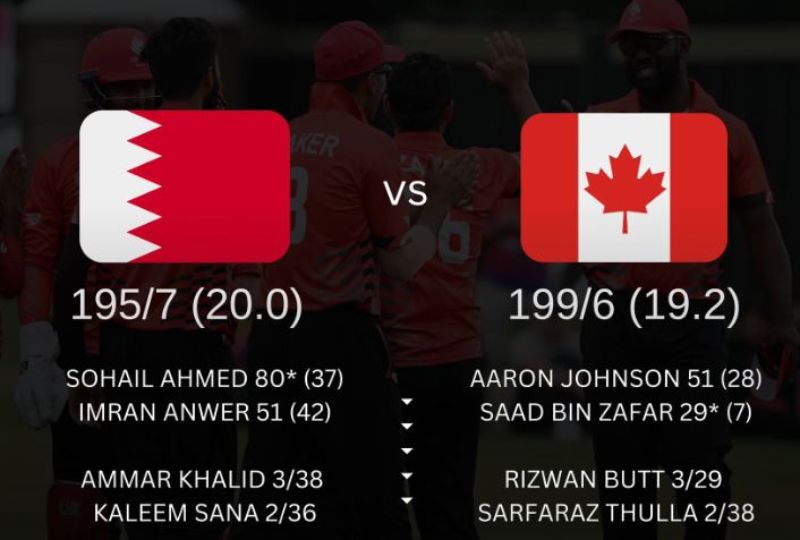 A remarkable, unbeaten, seven-ball knock of 29 by captain Saad bin Zafar propelled Canada to a sensational, last-over, four-wicket victory over Bahrain in their opening encounter of the Desert Cup T20I Series 2022 at the Al Amerat Cricket Ground in Muscat.

Needing 196 to win off 20 overs, Canada seemed to be well out of the contest when Zafar walked in to bat at number eight with the score reading 161 for six off 17.5 overs and his team needing 35 runs off just 13 deliveries.

He coolly guided the first ball he faced to third man before bludgeoning medium-pacer Shahid Mahmood for 28 runs, including two sixes and four fours, in the 19th over.

Suddenly, Canada need just seven runs to win off the last over and Harsh Thaker smashed a six and a four off the first two deliveries by Bahrain captain Sarfaraz Ali to seal an astonishing, come-from-nowhere triumph.

Earlier, after Zafar had won the toss and put Bahrain in to bat, middle-order batsman Sohail Ahmed played the innings of his life, smashing an unbeaten 80 off just 37 balls with nine fours and four sixes to take his team to an imposing 195 for seven.

Having come in with the score at 58 for three, Ahmed put on 58 runs for the fourth wicket in partnership with Imran Anwer.

When Anwer departed, bowled by Zafar for a rapid 42-ball 51 in the 14th over, Ahmed went into overdrive, smashing the ball to all parts of the ground as Bahrain ransacked 79 runs off the last six overs.

In reply, Canadian openers Aaron Johnson and Matthew Spoors got their team off to a bright start with a 79-run stand that ended in the 10th over with Johnson (51 off 28 balls) being adjudged leg-before to Ali, who also accounted for Spoors three balls later.

Suddenly, the pressure was on Canada and, as the asking rate climbed and the Bahraini bowlers applied a stranglehold, the incoming batsmen threw their bats at everything and wickets tumbled until the stage was set for player-of-the-match Zafar to turn the tables on Bahrain with his amazing, match-winning blitzkrieg.