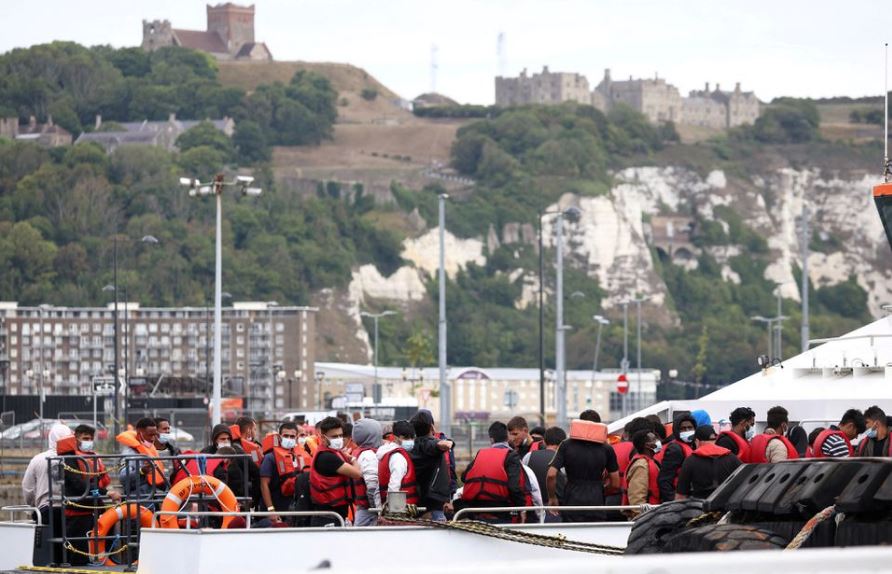 Migrants arrive at Dover harbour onboard a Border Force vessel, after being rescued while attempting to cross the English Channel, in Dover, Britain. Reuters File Photo

LONDON - Net migration to the United Kingdom rose to a record of around 504,000 in the year to June 2022, official statistics showed on Thursday, driven by an increase in the number of non-European Union nationals.

The Office for National Statistics (ONS) said a recovery of travel following Covid-19, and an increase in arrivals of international students who had been studying remotely during the pandemic had contributed to the rise.

An estimated 1.1 million long-term immigrants arrived in the year to June, an increase in 435,000 on the previous year. The biggest proportion of those leaving Britain were EU nationals.

Three new visa schemes - for Ukrainians fleeing the war, the resettlement of Afghan nationals and a route for Hong Kong British nationals - together added around 186,000 to the number of arrivals, the ONS said.

"A series of world events have impacted international migration patterns in the 12 months to June 2022. Taken together these were unprecedented," Jay Lindop, Director of the ONS Centre for International Migration, said.

"Migration from non-EU countries, specifically students, is driving this rise," Lindop added. "The many factors independent of each other contributing to migration at this time mean it is too early to say whether this picture will be sustained."

Concerns over the impact of immigration were one of the big drivers behind Britain's vote to leave the European Union in 2016. At the time the then Prime Minister David Cameron had failed for several years to hit a net migration target of less than 100,000 a year.

Migration levels have been in the headlines again in Britain in recent weeks as some business leaders called on the government to liberalise immigration to help boost growth. That has been rejected by Prime Minister Rishi Sunak who, on Monday, emphasised instead the need to tackle illegal immigration to build trust in Britain's migration system.

Sunak and interior minister Suella Braverman have also come under pressure to do more to stop illegal migrants making perilous journeys across the Channel, with the government criticised for conditions at an overcrowded processing centre in southern England and a fire bomb attack on a similar site nearby.

Earlier this month, Britain signed an agreement with France to ramp up efforts to stop migrants crossing the Channel.

Figures released by the government on Thursday showed 33,029 people were detected arriving by small boats across the Channel between January and September this year, with 61% of those people arriving over the summer in the months July to September.

The month of August saw the highest number of small boat arrivals of any month since data has been collected, it said.