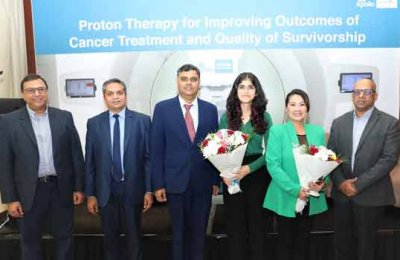 The Apollo Proton Therapy team
Apollo Proton Cancer Centre (APCC), the first and only proton therapy centre in South Asia and the Middle East, is employing Proton Beam Therapy for focused therapy for cancer.
Dr Srinivas Chilukuri, Senior Consultant, Radiation Oncology at the Apollo Proton Cancer Centre (APCC) highlighted at a press conference how complicated cases were treated with the utmost precision.
Proton therapy is a radiation therapy that uses tiny particles called protons as excellent cancer cell killers. Protons deliver their energy but do not damage healthy tissue in comparison to photon therapy.
Higher dose of radiation
Therefore, a higher dose of radiation can be targeted at the tumour without affecting many normal healthy cells. Proton therapy can be effective in treating many types of tumours, including tumours of the brain, head and neck, central nervous system, lung, prostate and gastrointestinal system.
Proton therapy is often the preferred option for treating solid tumours in children because protons can be controlled precisely so there is less radiation to normal tissues, helping prevent serious complications and lessening the chance of secondary tumours.
Proton Therapy has multiple advantages that target tumours and cancer cells with precision and minimal exit dose thus reducing overall toxicity. It also reduces the probability and/or severity of short-and long-term side effects on surrounding healthy tissues and organs. It is favourable in treating recurrent tumours, even in patients who have already received radiation.
Reducing side-effects
Dr Chilukuri, Senior Consultant, Radiation Oncology at APCC, said: “Proton Therapy has emerged as an excellent treatment modality for a number of cancers. Some of the most common cases being treated at APCC are pediatric cancers, brain tumours, head-neck cancers, and advanced tumours of the prostate, bone, and soft tissue including in challenging locations adjacent to the skull base and spinal cord. Proton therapy in most patients reduces the immediate and long-term side effects of treatment leading to not just improvement in survival but also survivorship.
“At Apollo Proton Cancer Centre, we have the latest PBS technology which enables us to deliver highly focused protons, spot-by-spot and layer-by-layer encompassing the entire tumour with reduced or even no dose to the adjacent healthy tissues. It has been proven to be successful in curing or controlling many cancers when used appropriately.”
Dr Chilukuri also said that Proton Therapy has emerged as an “excellent treatment modality for a number of cancers.”
Superior technology
Dinesh Madhavan, President- Group Oncology and International, Apollo Hospitals Enterprise Ltd, said: “Apollo Proton Cancer Centres treat patients with one of the most precise treatments for cancers. Proton therapy is a type of advanced radiation treatment that uses a precise beam of protons to target and destroy tumour and cancer cells. The therapy is delivered using far superior technology and is very effective for certain types of cancer. Our Multi-Disciplinary Team’s (MDT) approach of discussing every case with cancer management teams enables patients to win over cancer.”-- TradeArabia News Service