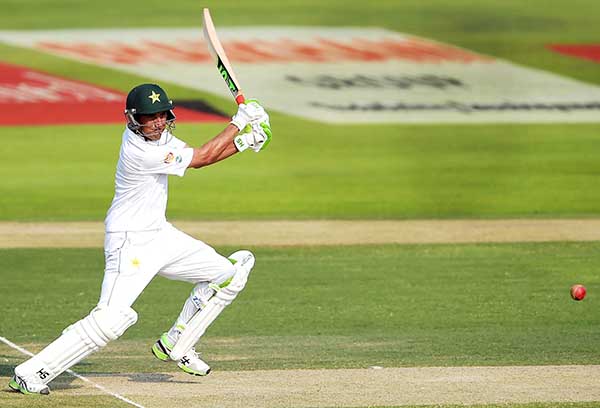 Abu Dhabi: Younis Khan showed no ill effects from dengue fever to score a brilliant century as Pakistan dominated the opening day of the second Test against the West Indies here yesterday.

The 38-year-old, who missed the 56-run victory in the first Test in Dubai with the illness and was in hospital just last month, smashed 127 to carry Pakistan to 304-4 at the close at Sheikh Zayed Stadium.

Younis finally holed out to deep mid-wicket off part-timer Kraigg Brathwaite after five hours at the crease, with fading light prompting the umpires to halt the day six overs before the scheduled close.

With Pakistan opting to bat after winning the toss, skipper Misbah-ul-Haq was unbeaten on 90 – just 10 runs short of his 11th hundred as Pakistan’s batsmen dominated on a batting-friendly pitch.

Younis, who hit 10 boundaries and a six, added 175 for the fourth wicket with Misbah and 87 for the third with Asad Shafiq, who made 68.

It was again the two veteran batsmen – Younis and Misbah – who put Pakistan on track for another big total with their 15th hundred partnership in 49 innings.

Misbah, who has now equalled Imran Khan’s record of most Test matches as Pakistan captain with 48, hit two sixes and four boundaries as he worked in tandem with Younis to build an imposing total.

The West Indies were guilty of sloppy fielding with Younis dropped on 83 when Brathwaite failed to hold a return catch off his own bowling and wicket-keeper Shai Hope handing Misbah a lifeline on 54 off paceman Shannon Gabriel.

Gabriel was the best of the bowlers with 2-43.

It was Younis’s 33rd Test hundred and 11th in the United Arab Emirates, where Pakistan have been hosting international fixtures because of security fears back home.

“I was a bit worried how I will cope after recovery because you lose weight and strength after dengue,” said Younis, who was admitted to hospital last month with the illness.

“I had not played any cricket since the Oval Test (in August). But I played some club cricket and that helped here.

“It’s a nice feeling to score a hundred and with Misbah taking the team to a respectable total, and I hope the rest of the batsmen take us to big total.”

Shafiq batted well in the extended two-and-a-half hour first session due to Friday prayers, hitting seven boundaries before playing on to Gabriel.

Ali, who scored a career-best 302 not out in Dubai, played on to Gabriel in the fifth over before Aslam was bowled by leg-spinner Devendra Bishoo attempting an ambitious drive.