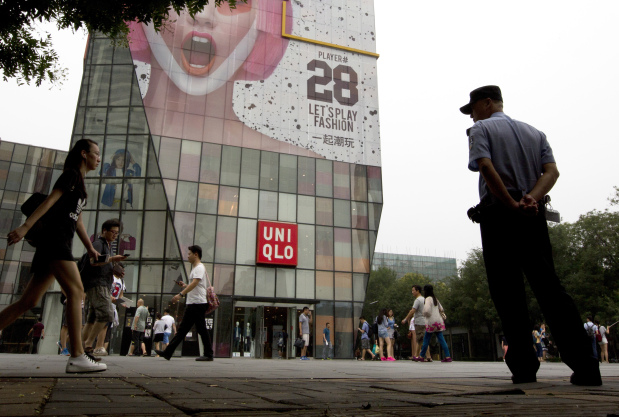 A policeman stands watch as people walk past the Uniqlo flagship store where a steamy video was purportedly taken inside one of its fitting rooms. (AP Photo)

Beijing: Four people have been detained in connection with a sex video purportedly taken inside a Uniqlo fitting room that spread rapidly online, Beijing police said.

They were detained on suspicion of spreading obscene content, according to a police statement. Police said, they were still investigating the couple who can be seen in the mobile phone video apparently having sex in the Japanese retailer's flagship Beijing store.

Uniqlo has denied any involvement in the video which spread widely online last week and gave rise to jokes about fitting rooms becoming the latest make-out spots.

The police statement said the couple admitted sending the video, which was made in April, to a friend on popular mobile chatting app WeChat, and that it later somehow appeared on the Twitter-like Sina Weibo's microblogging platform.

A 19-year-old man is suspected of posting the video online and the other three of spreading obscene information, the statement said.

In China, people convicted of disseminating obscene books, films, pictures and videos face up to two years' imprisonment, while those who make obscene products for profit face a maximum sentence of life imprisonment, according to the official Xinhua News Agency.