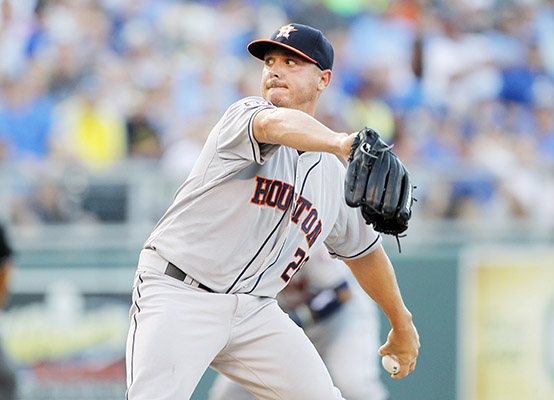 The Astros moved into a virtual tie for the lead of the AL West division while the Royals lead in the Central was trimmed to 5-1/2 games. The other AL division leader, the New York Yankees, suffered a heavy defeat at the hands of Minnesota and ex-Yankees pitcher Phil Hughes.

St Louis maintained its six-game break atop the National League Central by defeating Atlanta while Pittsburgh remained in touch with a victory over Washington. Despite that defeat, the Nationals stayed three games clear atop the NL East as the New York Mets were beaten at home by the Los Angeles Dodgers.

Houston’s Kazmir (6-5) , acquired by the Astros in a trade with Oakland on Thursday, only allowed one runner past first base, retired the last nine batters he faced, and lowered his season earned run average to 2.24. He hasn’t lost a July start since 2010, going 7-0 in 14 July starts since.

Preston Tucker had three of the Astros’ hits, including his fourth home run in five games when he hit a bases-loaded homer in the second.

Minnesota’s Phil Hughes pitched seven scoreless innings against his former team as the Twins cruised past the Yankees 10-1.

\Hughes (9-6) wiggled out of a bases-loaded jam in the seventh but the Twins were otherwise comfortable in handing New York its first loss in five games.

St Louis’ Randal Grichuk hit a two-run homer in the second inning for the second game running to help the Cardinals beat Atlanta 4-2.

St Louis improved to 6-1 since the All-Star break and pushed its home record to an MLB-best 35-12. Meanwhile, the Braves have lost their last six road games.

Pittsburgh’s Gregory Polanco homered and drove in three runs as the Pirates beat Washington 7-5, exacting some measure of revenge against Max Scherzer and the Nationals.

Just over a month after Scherzer pitched a no-hitter against the Pirates, Pittsburgh touched Washington’s ace for five runs in five innings. Neil Walker and Pedro Alvarez also homered off Scherzer; the most home runs he has given up in a game in nearly four years.

Los Angeles’ Justin Turner homered and drove in three runs against his former club to lead the Dodgers past the Mets 7-2.

Rookie Dodgers pitcher Ian Thomas (1-1) allowed one run over five innings in his first major league start. He was called up to pitch in place of Zack Greinke - who left the team the previous day to go home for the birth of his first child.