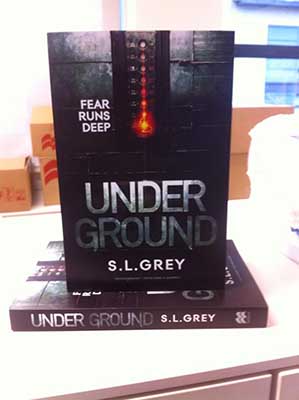 Under Ground is a collaboration between two writers, Sarah Lotz and Louis Greenberg, who formed the author’s name S L Grey.

The novel is a crime, thriller that centres on several families who share a self-sustaining condominium called The Sanctum.

Situated in rural Maine, The Sanctum is a shelter for the rich and paranoid who flee across America to escape a pandemic that has hit the country.

The residents of the shelter believe it to be the safest place on earth; however the prologue gives a small insight into what is to come later in the book.

Initially I was excited to read Under Ground, the prologue made it seem full of suspense, however what follows is chapter after chapter of character introductions.

Obviously the introduction and back story of each family is an integral part of the book, but it made for slow reading as I tried to keep track of who was who and I felt some of the characters lacked depth.

Once everyone has reached the shelter and they lock the hatch, the book gets more interesting with a death, which comes with the realisation for the characters that they are not as safe underground as they first thought.

I must admit that from this point in the book, it is a well-paced and nicely written novel that will likely have you on the edge of your seat at certain moments.

The Sanctum’s inhabitants are very diverse and as a result the reader gets multiple perspectives on the events that unfold in the shelter, which makes for interesting reading.

S L Grey effectively leads you to believe you know who the killer is and just as you think you have finally figured it out something happens to quickly persuade the reader they are mistaken.

All the events throughout Under Ground culminate into a really good ending, but no spoilers here, you will have to pick up a copy if this is your type of read.

If you are looking for a murder mystery with a post-apocalyptic twist, then look no further.

Under Ground by S L Grey is available for purchase at Jashanmal in City Centre Bahrain and Seef Mall for BD8.800.