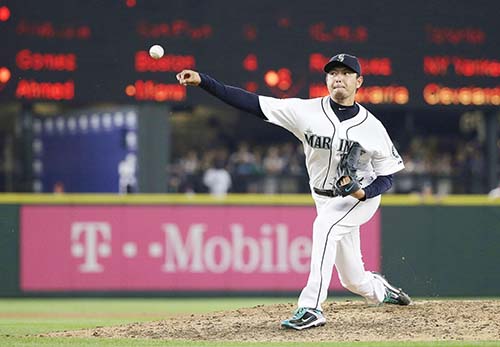 SEATTLE: Hisashi Iwakuma became just the second Japanese pitcher to throw a no-hitter and the fourth in Major League Baseball this season, striking out seven ON Wednesday as the Seattle Mariners blanked the Baltimore Orioles, 3-0.

Hideo Nomo is the only other Japanese pitcher to throw a no-hitter, achieving the feat twice in 1996 as a member of the Los Angeles Dodgers and in 2001 with the Boston Red Sox.

An over-the-shoulder catch from third baseman Kyle Seager in foul territory and a game-ending grab in centre field by outfielder Austin Jackson ended a knife-edged ninth inning and allowed Iwakuma to get the no-hitter.

“I was aware of it, obviously,” Iwakuma said through an interpreter. “But I kind of felt it real deep in my heart in the ninth inning. Just focusing on one hitter at a time, and I’m glad I got it done.”

The right-hander joins Cole Hamels of the Philadelphia Phillies, Max Scherzer of the Washington Nationals and Chris Heston of the San Francisco Giants as pitchers with no-hitters in 2015.

The 34-year-old Iwakuma is also the oldest Major League Baseball player to throw a no-hitter since Hall of Famer Randy Johnson in 2004 at age 40.

“To be honest, I never thought I would accomplish a no-hitter,” said Iwakuma, who threw 116 pitches and walked three batters in front of a crowd of 25,600 at Safeco Field. “I can’t find words to express my feelings. Extremely happy.”

Iwakuma got some help from his teammates on defence in the ninth inning.

Mariners third baseman Seager made a dazzling over-the-shoulder catch near the wall in foul territory for the first out of the final inning. Iwakuma got Baltimore’s Manny Machado to ground out for the second out.

The final out came when Orioles batter Gerardo Parra flied out to Jackson in centre field.

“I was feeling great. I felt the fans a lot in the ninth inning,” Iwakuma said. “The fans deserve it.”

It marked the fifth no-hitter in Seattle history.

The feat quickly trended on Twitter, with many using the hashtag #KumaNoNo -- combining Iwakuma’s nickname with no-no, the common slang term for a no-hitter.

Iwakuma is in his fourth season with the Mariners after earning a reputation as one of Japan’s top pitchers. He was making his 11th start of the season after battling injuries for much of the past two years.

Iwakuma doesn’t overpower batters with his fastball but few major league pitchers know how to keep batters guessing as well as he does.

“He is only getting better. This is the longest stretch he has had where he is truly healthy,” said Mariners manager Lloyd McClendon.

The Mariners had toyed with the idea of dealing Iwakuma away at the trade deadline to get some younger prospects but decided not to pull the trigger.

“I would have been going with him,” McClendon joked on Wednesday.

The Mariners took a 2-0 lead in the third inning on Franklin Gutierrez’s RBI double and Robinson Cano’s RBI single in back-to-back at-bats. Catcher Jesus Sucre added an RBI single in the fourth.

Iwakuma retired the first nine Baltimore batters before Machado walked in the top of the fourth.

Orioles first baseman Chris Davis added a two-out walk in that inning, but Iwakuma got out of the jam by striking out designated hitter Jimmy Paredes.

Iwakuma took off from there, retiring 10 straight before surrendering a leadoff walk in the eighth. His pitch count climbed to 112 before Orioles batter Caleb Joseph grounded into an inning-ending double play to keep the bid alive.

Iwakuma is the first American League pitcher to throw a no-hitter since teammate Felix Hernandez tossed a perfect game against the Tampa Bay Rays in August 2012. The previous 12 all came in the National League.