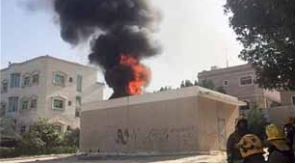 Qurain firemen were yesterday dispatched to Adan where a blaze started in a power transformer unit, said Kuwaiti security sources.

According to Kuwait Times, Ministry of Electricity and Water technicians disconnected the power before firemen contained the flames and put the fire out. No casualties were reported.

Meanwhile, in Khaitan, three people suffered smoke inhalation when a fire broke out on the ground floor of a nine-storey building, said security sources. The building was evacuated
and the fire was controlled without any further casualties.