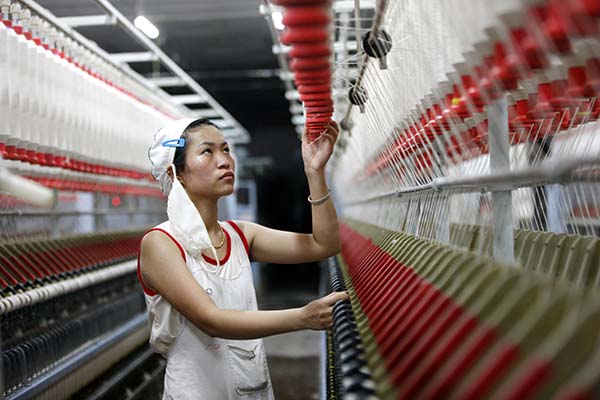 London: China’s giant manufacturing industry contracted and euro zone and US growth eased in August in data published yesterday, while the International Monetary Fund cut its forecast for world growth this year.

Stocks on major markets tumbled along with commodity prices following the data, with markets still trying to gauge the likelihood of a September interest rate increase by the Federal Reserve.

Tokyo stocks tumbled almost four per cent as China woes spread, with Europe’s main markets following in its wake by closing down by up to 3pc. The UK FTSE 100 slumped 3pc, its worst one-day fall in over a week.

“It’s all consistent with a global economy which clearly is struggling to make any significant headway,” said economist Peter Dixon at Commerzbank.

“As a consequence central banks which are thinking about raising interest rates in the near future will be looking at these numbers and it will maybe give them a little pause for thought.”

Global economic growth is likely to be weaker than earlier expected, the head of the IMF said, due to a slower recovery in advanced economies and a further slowdown in emerging nations.

Activity in China’s manufacturing sector contracted at its fastest pace in three years in August, according to official data, reinforcing fears of a sharper slowdown in the world’s second-largest economy despite a flurry of government support measures.

The Chinese government’s Purchasing Managers’ Index (PMI) fell to 49.7 in August from the previous month’s reading of 50, in line with expectations of analysts. A reading below 50 suggests contraction in activity.

A private survey from Markit/Caixin showed China’s factory sector shrank at its fastest pace in almost 6-1/2 years last month, with the PMI dropping to 47.3, the lowest since March 2009, from July’s 47.8.

Even China’s services sector, which has been one of the few bright spots in the sputtering economy, showed signs of cooling, expanding at its slowest rate in more than a year, Markit said.

“Today’s reading suggests that manufacturing activities in China remain weak. We now expect GDP to grow by an annual 6.4 per cent in the third quarter,” ANZ bank economists said.

Indian manufacturing growth slowed but remained positive with the Nikkei India manufacturing PMI compiled by Markit at 52.3 from July’s 52.7.

Japanese data went against the trend, with its manufacturing growth the strongest in seven months, reinforcing expectations the economy will rebound from a second-quarter contraction.

Euro zone manufacturing growth eased in August, adding to the ECB’s woes as it battles to spur expansion and inflation with an asset purchase programme.

Markit’s final manufacturing PMI for the euro zone was 52.3 last month, down from 52.43 in July, though it has been above the 50 mark that separates growth from contraction for over two years.

Yesterday’s disappointing readings come almost half a year after the ECB began pumping 60 billion euros a month of fresh cash into the economy and a day after official data showed inflation in the 19-country bloc at just 0.2pc.

However, a two-year spell of jobs growth across British factories came to an end last month as manufacturing activity expanded at a slower pace, suggesting the sector is unlikely to boost economic growth much there this quarter.

Growth in the US manufacturing sector slowed to its weakest in almost two years in August, with the Markit PMI falling to 53.0 in August, down from 53.8 in July.

“August’s survey highlights that the US manufacturing sector continues to struggle under the weight of the strong dollar and heightened global economic uncertainty, but resilient domestic spending and subdued cost pressures are keeping the recovery on track,” said Tim Moore, senior economist at Markit.

“Reflecting this, new orders from abroad have now fallen in four of the past five months, which represents the weakest phase of manufacturing export performance since late 2012.”

Canada’s factory activity contracted in August, with the Markit/RBC PMI falling to a 49.4 from 50.8 in July.

In other data yesterday, Canada’s economy shrank at an annualised 0.5pc rate in the second quarter, putting the country in recession for the first time since the financial crisis of 2008 with the cheaper price of oil taking a toll.