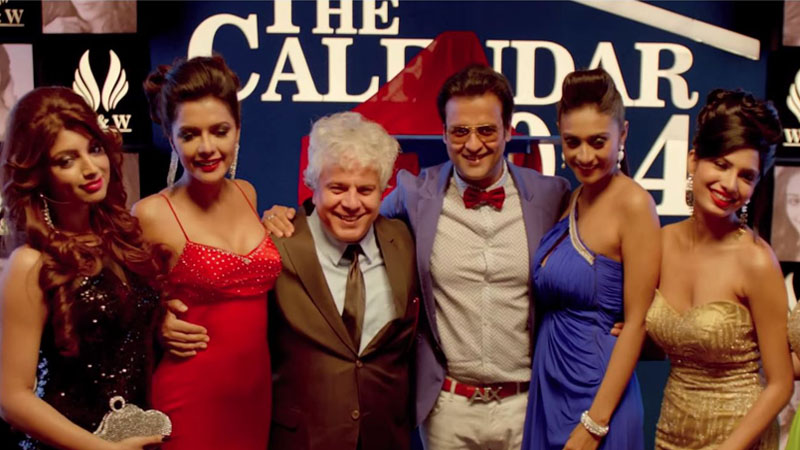 A women-centric film marred by brazen gender insensitivity, 'Calendar Girls' offers dollops of sex and sleaze while pretending to be on the side of victims of showbiz exploitation.

In short, 'Calendar Girls' is a complete disaster. The screenplay is abominably vacuous, the dialogue is pathetically pedestrian, and the quality of the acting is substandard.

There isn't a single saving grace in sight in this brainless two hour-plus ride.

In 2012, his fortunes nosedived on the back of the glitzy 'Heroine', featuring Kareena Kapoor.

Three years on, the director completes what could be described as a glamour industry trilogy with the starless 'Calendar Girls'.

The film is evidence that Bhandarkar has run out of ideas and steam. It employs his formulaic blend of a supposedly real story with an unsubtle filmmaking style to expose the seamier side of the world of entertainment.

Five girls from different backgrounds are selected for a calendar shoot by one of the country's top photographers (Rohit Roy).

The girls (Akanksha Puri, Avani Modi, Kyra Dutt, Ruhi Singh and Satarupa Pyne) are thrilled to bits. They expect the shoot to change their lives for good.

But real life in Mumbai is cut-throat and they find themselves surrounded by men and women out to exploit them to their own advantage.

'Calendar Girls' might have worked had the director adopted a more subdued approach to the depiction the plight of vulnerable girls in a hostile world.

What Bhandarkar does is go all out to prove his point. In the bargain, he comes up with a flawed portrait that provides the audience neither any meaningful insight nor any genuine diversion.

If anything, 'Calendar Girls' does to the actresses exactly what it accuses the glamour industry of meting out to the girls who join it in hordes in the hope of striking it rich.

There is no dearth of skin show in this film and much of it is absolutely gratuitous and tasteless.

One of the girls, a Pakistani model from London, becomes a high society escort. Another, a Kolkata lass whose family is against her move to Mumbai, gets drawn into the cricket underworld.

Yet another of them, a girl from a well-off Hyderabad family, finds herself trapped in an unhappy marriage with a wealthy playboy.

A fourth one, a Goan go-getter, becomes a television anchor after a rough and unpleasant brush with the fashion industry.

Only one of the five girls, a wannabe actress from Rohtak, seems to have a relatively smooth ride in big, bad Mumbai as she spiritedly navigates the movie industry.

'Calendar Girls' is replete with cliches that lack conviction and play out along predictable lines.

And that is pretty much the story of the film as a whole.

'Calendar Girls' is not worth anybody's time, money or attention.