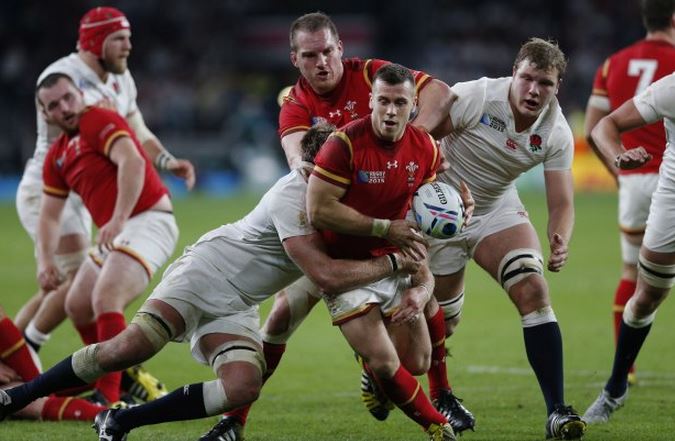 London: Dan Biggar kicked Wales to a stunning 28-25 comeback victory over World Cup hosts England on Saturday as South Africa got their campaign back on course with an emphatic 46-6 triumph over Samoa.

The Welsh hero and South Africa wing JP Pietersen, scorer of three tries, were the individual stars on the most electrifying day so far of a World Cup that is keeping the fans on the edge of their seats with upset results and thrilling rugby.

Italy beat Canada 23-18 in the third game which produced the best try of the tournament so far in the shape of Canada wing DTH van der Merwe's effort started by him deep inside his own half.

Biggar, who normally sees the kicking duties handled by the injured Leigh Halfpenny, emerged from the shadows to kick 23 points from seven penalties and a conversion -- a record points haul for a Welshman against England.

A brilliant Gareth Davies try capped a determined come-from-behind performance by the Welsh as a whole leaving Biggar embarrassed at being named man of the match.

"For us to come here, no one gave us a hope. I feel cheeky taking man of the match. It should be shared by all of the boys today," said 25-year-old Biggar.

"We kept on believing. We kept sticking to our structure. It was the best day's rugby of our careers."

The victory has seen Wales take a huge step towards the last eight although they still have two testing games to come against the unpredictable Fijians, who beat them in the 2007 finals, and the two-time world champion Wallabies.

England must now beat world number two side Australia in their next game with coach Stuart Lancaster saying he was "gutted" by the defeat after establishing a comfortable lead.

"We have talked a lot about discipline and breakdown penalties and we gave some dumb ones away which allowed them to keep in the game," he said.

There was also much debate about the decison by captain Chris Robshaw to opt not for a kick at goal when England was awarded a penalty two minutes from the end which if successful would have at least drawn the sides level.

Instead of that he decided instead go for a game-winning try, unlike the Japanese the Saturday before against the South Africans this time it didn't come off.

The win put South Africa on top of Pool B with seven points from two games.

"We were open about it all week, on the situation that we were in," Pietersen said.

"The only way to get out of the situation was (up to) ourselves. We told ourselves that if we win our remaining three games then we will definitely qualify."

For coach Heyneke Meyer it was a welcome relief after the intense pressure that had come to bear on him following the Japanese reversal.

"We're a country that needs hope and forgiveness working for each other," said Meyer.

The win may have saved Meyer and captain Jean de Villiers from the sack. But they still face problems before their next match against Scotland next weekend.

De Villiers went to hospital after the Samoa game with a suspected broken jaw -- the latest in a series of injuries suffered by the veteran centre.

Lock Eben Etzebeth also went to hospital for x-rays. Centres Damian de Allende and Jesse Kriel also went off, de Villiers having to replace Kriel whose face bore several bruises. Both will be inspected by the team doctor on Sunday.

Mauro Bergamasco also became only the second player to take part in five World Cups when he came on as a second-half replacement.