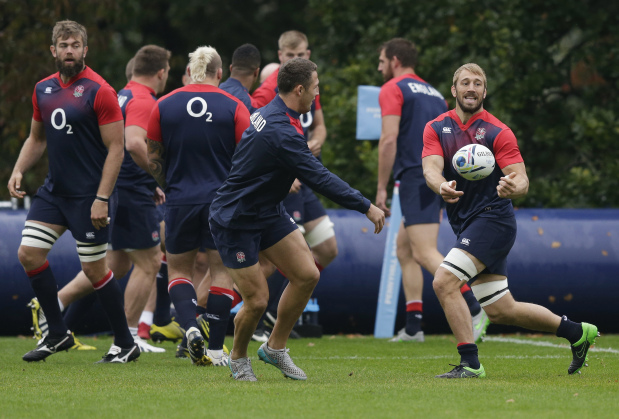 Lancaster has brought in four players for their World Cup debut at the Manchester game on Saturday after which England's interest in the tournament ends following their humiliating defeats to Wales and Australia.

Burgess, Lancaster's most argued over squad selection and whose inclusion reportedly alienated some players angered that regular choice Luther Burrell had been excluded, does not even make the replacements bench.

England's coaching staff had rejected those reports and that he was brought in too quickly after less than a year in the game.

No immediate reason was given for Burgess' absence.

Chris Robshaw remains captain despite calls for him to be dropped after the 33-13 whipping by Australia at Twickenham on Saturday.

The match could be Lancaster's last in charge.

His bosses at the Rugby Football Union (RFU) has ordered a review into the World Cup disaster and several strong candidates are already expressing interest in the post.

Lancaster, though, said despite the game having no impact on the line-up for the quarter-finals it offered chances to those who had not played a part in the tournament so far.

"This is an opportunity for us to finish the tournament with a strong performance against Uruguay and a chance for the likes of young players such as Jack Nowell and Henry Slade to play in a World Cup," said Lancaster.

"We owe it to ourselves and the supporters who have been brilliant throughout."

In the pack, Mako Vunipola starts in place of Joe Marler at loosehead prop, with James Haskell and Nick Easter replacing Tom Wood and Ben Morgan in the back row.

Owen Farrell takes over from injured Saracens clubmate Brad Barritt in the number 12 jersey and George Ford -- who Lancaster was castigated for dropping for the Wales game -- returns at fly half.

"Brad Barritt (arm) and Courtney Lawes (knee) are not available this weekend and Ben Morgan (dead leg) and Ben Youngs (ankle) will not be able to train fully until Thursday," said Lancaster.