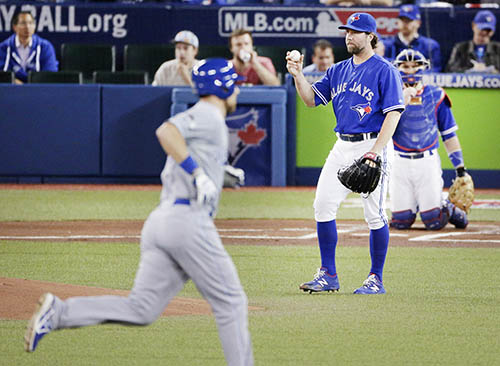 TORONTO: Kansas City and the New York Mets both moved within one win of berths in the World Series by taking road victories on Tuesday.

The Royals routed Toronto 14-2 to take a 3-1 series lead in the American League Championship Series.

Ben Zobrist hit a two-run homer off just the fourth pitch of the game from Blue Jays starter RA Dickey to put the visitors in control and they pulled away late for a big win.

New York second baseman David Murphy hit a homer for the fifth straight game as the Mets won 5-2 at the Chicago Cubs to go up 3-0 in the National League Championship series.

Yoenis Cespedes and David Wright each had three hits for the Mets. Cespedes scored the go-ahead run in the sixth inning when he dashed in from third base on a two-out wild pitch by Trevor Cahill on a strikeout.

Kansas City, looking to return to the World Series after losing to San Francisco last year, was quickly in control following Zobrist’s shot.

Lorenzo Cain scored on a passed ball and Mike Moustakas had a sacrifice fly in an LCS-record four-run top of the first.

Alex Rios homered in the second, and Kansas led 5-2 in the seventh before breaking away.

After flashing power to build their early lead, the Royals scored nine runs with three more sacrifice flies, a barrage of slashing hits and canny base running.

“We’re a good offensive team,” first baseman Eric Hosmer said. “Our park, our style of play is a little different. We like to use our legs and be athletic, but when we come to some of these parks where the fences aren’t as deep we’ve got some guys that can put the ball in the seats.”

The 36-year-old Kansas City pitcher Chris Young bested Dickey, 40, in a matchup of veteran starters — only the pairing of the Yankees’ Randy Johnson and Detroit’s Kenny Rogers in the 2006 ALDS tops the duo for combined age.

“It’s a do-or-die game for us,” Toronto manager John Gibbons said. “But they do it all year. These guys will let this one go and they’ll show up to play tomorrow. ... I know these guys will be ready.”

Mets starter De Grom allowed two solo homers in the first four innings, but from then on, they locked down on a precocious Cubs lineup that has scored just five runs across the three games of the series.