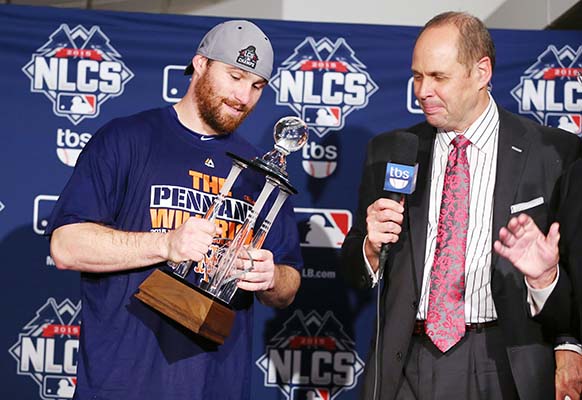 Chicago: The New York Mets booked a place in the World Series with an 8-3 victory yesterday that completed a 4-0 series sweep of Chicago, extending the Cubs’ extraordinary history of playoff futility.

Daniel Murphy hit a home run for the sixth straight playoff game to set a new major league record and help the Mets into the World Series for the first time in 15 years.

“I can’t explain it,” Murphy said. “It’s such a blessing to contribute to what we’ve been able to do.”

The Mets will meet the winner of the American League Championship Series which stands at 3-2 in favour of Kansas City after Toronto won 7-1 on Wednesday to stay alive and send the series back to Kansas City.

New York quickly silenced an expectant crowd at Wrigley Field when Lucas Duda hit a three-run homer in the first inning and a two-run double in the second.

The Cubs had some glimpses at a comeback - loading the bases with no outs in the fourth inning - but exited the postseason wondering when, if ever, the club can end its run of no World Series victories since 1908.

By wrapping up the National League Championship Series so quickly, the Mets have no restriction on when to deploy their impressive starting pitching options in the World Series. Jacob deGrom, Matt Harvey and Noah Syndergaard will all be fully rested for the opening three games.

Murphy had another superb game with four hits, but it looked as if his chance had gone to set a record for successive playoff games with homers. Then in the eighth inning he connected for a two-run drive over centre field.

Duda doubled twice and Travis d’Arnaud also homered as the Mets won their fifth NL pennant. Bartolo Colon pitched 1 1-3 scoreless innings for his first playoff win since 2001, for Cleveland at Seattle. The 14 years, 12 days between postseason victories for the 42-year-old set a new major league record.

The Cubs had the fans on their feet when they loaded the bases with no outs in the fourth, but wound up scoring only one run. That could have been different had Starlin Castro’s bullet-like connection had got past David Wright instead of nestling in the third baseman’s glove for the first out.

In Toronto, Marco Estrada restricted Kansas City to one hit over the first seven innings to steer the Blue Jays to a 7-1 win against the Royals and keep alive their hopes of reaching the World Series.

Tulowitzki provided three of those runs. He broke the game open with a bases-clearing double in the sixth, giving him seven RBIs in the series. Edwin Encarnacion had walked with the bases loaded against Kansas City starter Edinson Volquez, who seemed flustered by a couple of close calls.

Kansas City totalled 22 runs and 30 hits in the first two games in Toronto, but Estrada faced the minimum 20 batters before allowing a walk with two outs in the seventh. Closer Roberto Osuna was perfect in the ninth.

Toronto is trying to become just the 13th team to rally from a 3-1 deficit in a best-of-seven postseason series. It would be long-delayed revenge for Kansas City pulling off that feat against the Blue Jays in the 1985 ALCS en route to the Royals’ only World Series title.