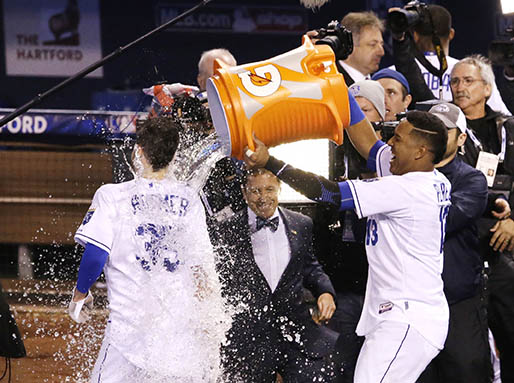 Kansas City: Unflinching despite on-field setbacks and off-field heartbreak, the Kansas City Royals outlasted the New York Mets 5-4 in 14 innings Tuesday to win game one of the 111th World Series.

Eric Hosmer drove in Alcides Escobar with a sacrifice fly to give the Royals an emotional victory in a thriller that matched the longest game by innings in the history of Major League Baseball’s best-of-seven final.

“To grind through that game and win it in the 14th inning was big,” Royals manager Ned Yost said. “Two things you don’t want in game one of the World Series – one is to go 14 innings and the other is to lose.”

The intense matchup lasted five hours and nine minutes, the longest World Series opener by time or innings, and featured Escobar leading off with the first inside the park World Series home run in 86 years.

But much of the joy was stolen from the achievement as players learned of the death of Royals starting pitcher Edinson Volquez’s father just hours earlier – the third Royals player parent to die in the past three months.

“I found out right before we won. In the locker room, during the celebration, we all talked about it,” Royals slugger Alex Gordon said. “That’s tough. But we’re a family and we rallied around him and picked him up and hopefully everything is OK.”

Volquez’s 63-year-old father Daniel died of heart disease before the game in their native Dominican Republic. Volquez’s wife asked that her husband not be told until he was out of the game, according to a Royals spokesman, and Volquez departed before the game ended.

Juan Lagares gave New York a 4-3 lead in the eighth, scoring from second base on a fielding error by first baseman Hosmer.

But the drama stretched to extra innings when Gordon blasted a one-out homer over the centerfield wall in the ninth inning, the latest tying homer in a Series game since 2001. It came off Mets closing relief ace Jeurys Familia, his first blown save opportunity since July 30.

“He doesn’t give up home runs so we were all shocked by it. We liked where we were at,” Mets manager Terry Collins said. “We’ve got to put them away. We’ve got to do a better job. In the same situation, he’ll be back out there.”

Kansas City’s Paulo Orlando, the first Brazilian player in World Series history, reached third with the bases loaded in the 12th but could not score and missed a chance to be the hero again in the 13th, grounding out to end the inning with a runner in scoring position.

The tension finally ended when Escobar reached first on a throwing error by Mets third baseman David Wright, took third on Ben Zobrist’s single and scored the winning run on Hosmer’s fly out to right field.

“Obviously I wanted to redeem myself for what happened earlier,” Hosmer said. “I can’t thank my teammates enough for picking me up and giving me another opportunity.”

Kansas City hosts game two Wednesday in the best-of-seven final before it shifts to New York. The Royals won their only World Series in 1985. The Mets last captured the crown in 1986.