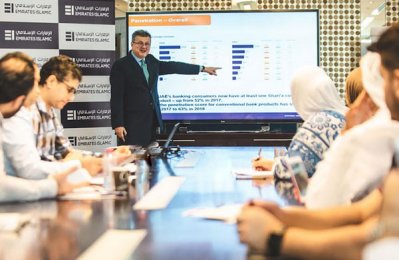 Islamic banks are outperforming their conventional peers in customer acquisition with 55 per cent of the UAE consumers now having at least one Islamic banking product, compared to 47 per cent in 2015, a report said.

The popularity of Islamic banking products continues to grow in the UAE among both Muslim and non-Muslim customers, added the findings of the 2018 Islamic Banking Index by Emirates Islamic,a leading bank in the region.

The index is a benchmark survey revealing the progress, penetration and perception of the Shari’a-compliant banking sector in the UAE, as well as the future intentions of the nation’s banking customers.

Commenting on the results of the 2018 Index, Wasim Saifi, deputy CEO-Consumer Banking and Wealth Management at Emirates Islamic said: “We are delighted to see that Islamic banking continues to expand its appeal and reach, outpacing the growth of conventional banks.  With 85 per cent of the UAE’s banking population open to Islamic banking products, we can anticipate that Shari’a-compliant banking will gain further traction, especially as we prepare to receive an increased number of residents and visitors in the run up to Expo 2020 Dubai.”

Saifi continued: “Islamic banks have clearly done an outstanding job in enhancing the overall customer experience and proposition. The survey shows that respondents consider Islamic banks more trustworthy, supportive of the community in meaningful ways and more financially sound than their conventional counterparts, while showing a marked improvement in perception on embracing the latest technology.

“The opportunity for Islamic banks lies now in improving the awareness of the core values and benefits of Islamic banking while continuing to invest in digital technology to create pioneering solutions and innovative, new and differentiated customer experiences. We aim to meet and exceed the demands of today’s digital-minded customer, as we work towards fulfilling the vision of His Highness Sheikh Mohammed bin Rashid Al Maktoum, Vice President and Prime Minister of the UAE and Ruler of Dubai, to make Dubai the global capital of Islamic economy.”

•    Number of non-Muslim consumers taking a product from an Islamic bank continues to rise, up by 2 percentage points to 40 per cent this year

•    Islamic banks have made impressive progress in customers’ perception on technology – up 6 points on 2017– and mobile banking apps – up 5 points over last year, while maintaining their lead over conventional banks on being trustworthy and supporting the community in meaningful ways

•    Muslim consumers are increasingly viewing Islamic banks as technologically advanced, up 5 points since 2017.


•    Among non-Muslims, Islamic banks have been seen falling behind conventional banks on faster service and easy procedures