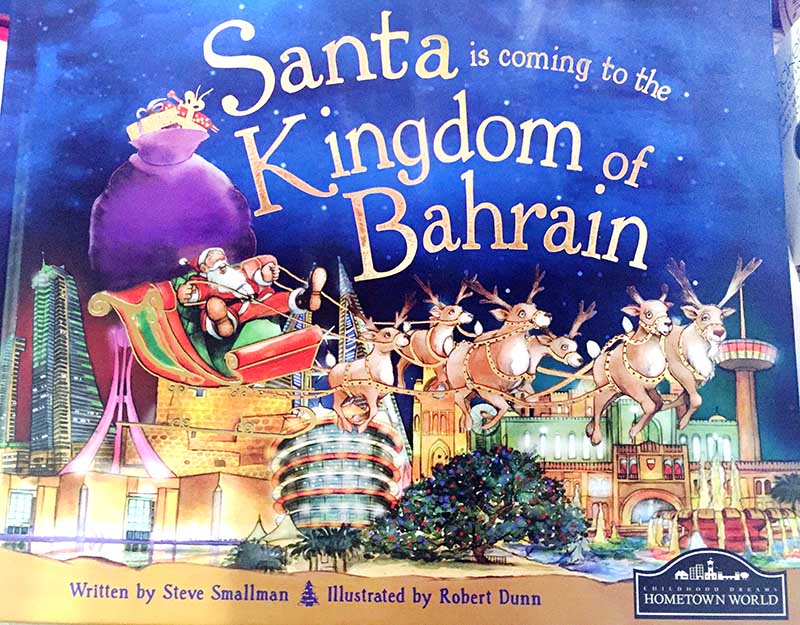 Christmas is coming, and so is Santa as he visits Bahrain in a book published by UK-based Hometown World.

Santa is Coming to the Kingdom of Bahrain was written by Steve Smallman as part of a series where Santa visits many places around the world.

“As well as towns, cities and states in the UK, US, Australia and New Zealand, Santa has visited a few European countries, but has plans for lots more,” said Mr Smallman.

“In the Middle East Santa has also been to Dubai and Abu Dhabi in the UAE as well as Bahrain.”

Hometown World and Mr Smallman worked with local book distributors to collect information about Bahrain and make the storyline more country specific – with each book in the series featuring individual artwork to accompany the narrative.

“Bahrain is home to many children who look forward to the seasonal celebration, so we wanted to include them,” said Mr Smallman.

“The art for the landscape and buildings changes to reflect the locality as well as the names of places Santa visits within the story on his route from the North Pole.

The story opens with Santa loading up his sleigh on Christmas Eve.

“He sets his Santanav to the co-ordinates for Bahrain and is soon on his way,” said Mr Smallman.

“But local weather conditions lead to an unplanned landing, and you’ll have to read the book to find out what happens to Santa and whether he manages to deliver all his Bahrain presents on time.”

The idea for the series was a result of Hometown World publishing books with local content.

“So Santa’s story seemed like a perfect fit as he visits children around the world,” said Mr Smallman.

“This was Santa’s first collection but he also has one called Santa’ Sleigh Is On Its Way, and also My First Santa Is Coming, which is a board book for younger readers.”

Santa is Coming To the Kingdom of Bahrain would make a lovely Christmas gift for younger members of the family, and you can pick up a copy from Homezone in Seef Mall.