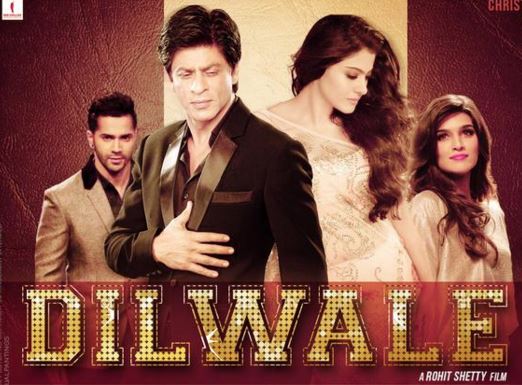 ‘Dilwale’ will entertain those who are going to movie theatres with realistic expectations.

Let’s face it, ‘DDLJ‘ is a romantic cult classic and ‘Dilwale’ is an out and out entertainer.

And beyond the Shah Rukh-Kajol pairing, the two movies have almost nothing in common.

It is a typical Rohit Shetty formula movie with action, comedy, romance and drama.

But as luck would have it, the duo part ways following a huge misunderstanding.

15 years go by, Raj and his brother Veer, played by Varun Dhawan, run a garage.

Veer loves a girl Ishita (Kriti), who he later discovers is Meera’s sister.

As Veer-Ishita unravel the love story of their elder siblings, they decide to bring them back together.

The movie is filled with Rohit Shetty brand of stunts. Watching SRK will be a treat for fans and Kajol too has done a convincing job of playing a gangster.

For fans who want to see the epic SRK-Kajol pair, ‘Gerua’ song and the special ‘five minute’ date will be the highlights of the movie.

However, the idea of the ‘five minute’ date is a rip-off of the ‘two minute’ date in the American sitcom ‘How I met your mother.’

There are a few references to DDLJ, the best being SRK’s dialogue at the end of the movie, ‘Aise bade bade shehron mein aisi chhoti chhoti baatein hoti rehti hain, senorita.’

The most talked about ‘train sequence’ in Dilwale, that was said to relive the epic climax scene from DDLJ, comes when SRK escorts an injured Kajol onto a tram while she gives him her phone number.

Performances from SRK, Kajol, and Varun have been rock solid.  However Kriti Sanon does not do much to impress.

Johnny Lever, Boman Irani and Sanjai Mishra will leave you in splits with their comic timing.

All in all ‘Dilwale’ is a wholesome family entertainer.