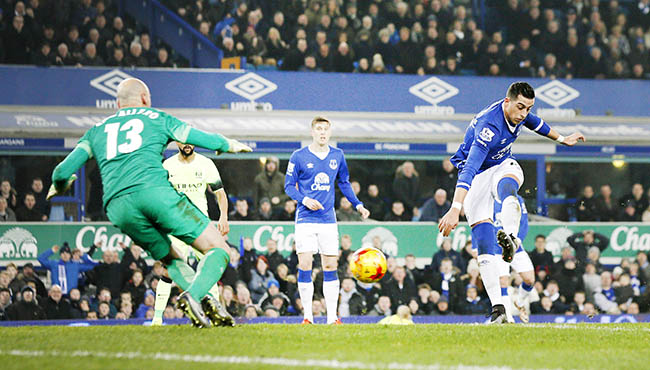 The goal gave Everton a deserved advantage to take into the second leg on Jan. 27 after they largely dominated proceedings at Goodison Park and restricted three-times winners City to infrequent counter attacks.

Awaiting the winners in the final will be either Liverpool or Stoke City, with Everton’s Merseyside rivals holding a 1-0 advantage after the first leg.

For Everton, it is more than 20 years since they last won a trophy. The FA Cup in 1995 was the last addition to the trophy cabinet at Goodison Park, which during the 1980s had also been home to two league titles and a further FA Cup success in 1984.

Roberto Martinez’s side have reached the last four of the competition for the first time since 2008 and the Everton manager is determined to end the trophy drought.

Everton are currently 11th in the Premier League after drawing 1-1 at home to Tottenham on Sunday.

That position does not perhaps reflect the talent Martinez has in his squad in the shape of England defenders John Stones and Leighton Baines, Ross Barkley in midfield and 18-goal top scorer Romelu Lukaku in attack.

City won the League Cup and the Premier League in 2014.

Manuel Pellegrini’s side are still chasing a possible quadruple in the League Cup, Champions League, Premier League and FA Cup, with their campaign in the latter competition due to start at Norwich on Saturday.