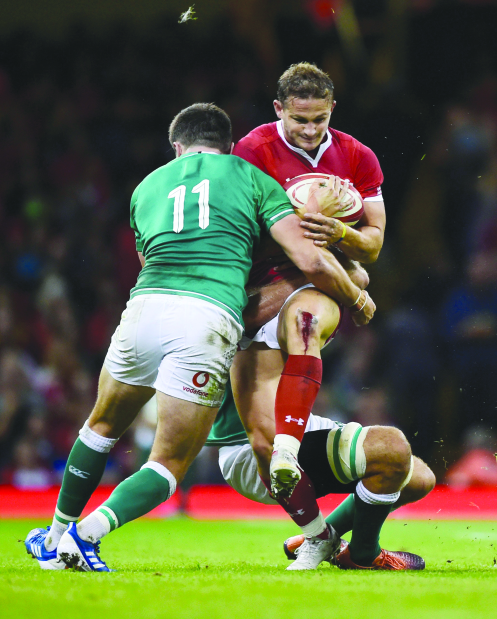 Gatland, stepping down after the tournament in Japan following 12 years as Wales coach, fielded a reserve side against an equally experimental Irish line-up in his last home game in charge.

But he left the Principality Stadium wondering what could have been as Ireland’s fringe players, with Carty to the fore, gelled immediately while Wales struggled for fluency before staging a late fightback.

The result ended Wales’ 11-game winning home run and also saw them lose their short-lived status as the world’s top-ranked side - that accolade will be reclaimed by New Zealand next week when the rankings are published.

Ireland, shocked 57-15 by England at Twickenham last week, made 11 changes, while Wales made 14.

But it was regular first-choice winger Stockdale, brilliantly set up by fellow flier Andrew Conway, who crossed in the left corner after 18 minutes and then pounced on a Welsh handling error and dashed over again 10 minutes later.

Wales, losing 22-3 with 20 minutes left after conceding a penalty try to the dominant Irish scrum, surged back with two late tries of their own but could not complete a fairytale ending for Gatland.

While the encounter was essentially a reserve match, it was hugely important for individual players hoping to book a late seat on the plane to Japan.

Man-of-the-match Carty, on his first start as well as his 27th birthday, was a big individual winner. With first-choice flyhalf Johnny Sexton and understudy Joey Carbery out injured, this was his chance to impress and he duly ran the show from the first whistle.

“Today was massive for us,” said Carty. “We were all hurting during the week but we came together.

“Our defence was really good for the vast majority of that game against a quality Welsh outfit. We knew they were going to get a purple patch at some stage... but the forward pack gave us a great platform - when you have that it is very easy.”

Wales’s number 10, Rhys Patchell, who came on in the second half, was also hugely impressive in his attempt to be selected as World Cup back-up for first-choice Dan Biggar.

Patchell quickly brought Wales to life and almost produced the perfect finale when, in the 76th minute, he received the ball following a series of Welsh drives and sidestepped over, adding the conversion to bring them to within a single score before Ireland closed out the game.