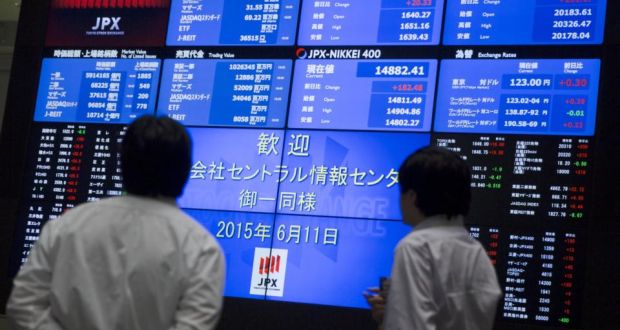 Official figures showed GDP growth came in at 6.9 per cent last year, its weakest rate for a quarter of a century and below the 7.3 per cent of 2014.

However, the figures broadly met the government's forecast of "around seven per cent", while exactly matching the prediction of an AFP survey, and helped lift investor sentiment.

"Beijing will be anxious to ensure growth momentum does not slow excessively," Bernard Aw, a Singapore-based strategist at IG Asia, told Bloomberg News.

The dollar rose against the Japanese currency after investors cautiously moved into riskier assets.

The greenback gained to 117.79 yen from 117.33 yen late Monday in London. US markets were closed Monday for Martin Luther King Day.

A weaker yen boosts the overseas profitability of Japan's exporters and tends to increase demand for their shares.

In individual share trading, Nintendo advanced 9.07 per cent to 15,990 yen after Bank of America and Macquarie upgraded their outlook for the video game maker.