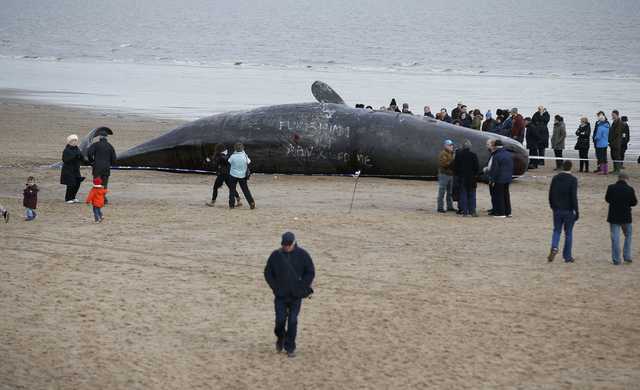 A sperm whale lies on the sand after being washed ashore at Skegness beach in Britain. (Reuters Photo)

The carcass of a fifth sperm whale has washed up on England's east coast, the coastguard said, after four others died in a spate of beachings nearby in recent days.

A pod of up to six whales had been spotted close to the shoreline on Friday.

"HM Coastguard can confirm that a fifth whale has washed up near Wainfleet, (Lincolnshire). The area is currently inaccessible," the coastguard said.

The latest case follows the the death of a beached whale in Hunstanton, Norfolk, on Friday and the discovery of three carcasses near the resort of Skegness over the weekend.

One the Skegness whales could be seen with "Mans (sic) Fault" spray-painted on its tail. Small groups of people gathered around the corpses, taking photographs.

The cause of the deaths was not immediately known, although there have been several previous examples of sperm whales becoming confused and beaching in the shallow waters of the North Sea.