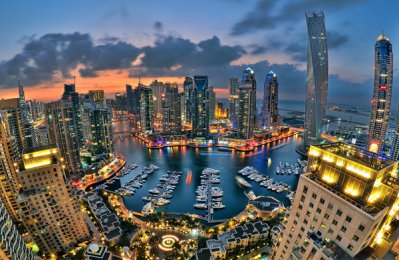 Dubai welcomed over 14.2 million overnight visitors in 2015, recording a strong 7.5 per cent increase over 2014, according to annual figures released by Dubai's Department of Tourism and Commerce Marketing (Dubai Tourism).

Dubai Tourism said the emirate's tourism sector once again proved the tenacity and strength of its economic contribution, as it made steady progress towards the target of 20 million visitors per year by 2020, despite a year afflicted by macro-economic uncertainties, and amidst a particularly turbulent geo-political climate during the second half of 2015 internationally.

Helal Saeed Almarri, director general, Dubai Tourism, said: "Under the vision of His Highness Sheikh Mohammed Bin Rashid Al Maktoum, Vice-President and Prime Minister of the UAE and Ruler of Dubai, last year was a very strong year for Dubai's travel sector, achieving double the global industry growth levels and our international visitation hitting 14.2 million, which firmly positions us as the fourth most visited city in the world.

"Our performance over the past 12 months is undeniably reflective of the resilience of our diversified market strategy, our unified industry-level responsiveness, and ultimately the sustained strength of Dubai's proposition."

Through the pursuit of a multi-geography visitation mix strategy, Dubai furthered the performance achieved in the first half of the year to deliver strong growth across key feeder regions, mitigating the downward trends in specific countries.

The GCC remained the regional foothold, supporting continued demand from near-markets to Dubai, consequently delivering the highest share of visitor volumes for 2015, with a total of 3.3 million, up 12.8 per cent over 2014.

In terms of country-specific volumes from the GCC, Saudi Arabia remained the lead market, contributing 1.54 million visitors, followed by Oman accounting for over 1 million travellers.

Kuwait and Qatar were also among the top 20 markets, with the former the only one to register a decline in growth versus 2014 yet retaining its top 10 position, and the latter recovering strongly from mid-year with a high 32 per cent year-on-year increase for the full year of 2015.

Despite a sluggish economy and a strong US Dollar constraining Dubai's competitiveness, Western Europe remained the second highest regional contributor to visitor volumes, bringing in nearly 3 million tourists, reflecting a solid 6.1 per cent growth in numbers.

Germany also stayed in the top 10 list with 7 per cent growth generating over 460,000 visitors, followed by two others in the top 20 traffic generators - France showing a slight decline primarily in the last quarter of 2015, and Italy remaining flat versus 2014.

Northern European markets across the Nordics and the Benelux, while independently small in volume, have been frontier growth generators for tourism traffic in 2015, on the back of growing direct flight capacity from the region.

South Asia was the next largest region by volume, bringing in 2.3 million visitors, reflecting a 21.7 per cent increase versus 2014.

India dominated the region, becoming Dubai's number one source market for the first time by bringing in over 1.6 million tourists, and the country was the second fastest growing market with a 26% per cent year-on-year growth, followed by Pakistan that ranked just outside the top five, ending 2015 at 11 per cent growth and 513,000 visitors.

Efforts to serve highly segment-specific messaging in cities with the highest connectivity and latent capacity, as well as building stronger trade ties in market with digital travel intermediaries, have yielded results and will continue to enable Dubai to capture a share of the growing Indian upper middle-class family and business segments.

Over 1.6 million visitors came from the wider Middle East and North Africa region, representing a 1.3 per cent growth - a strong outcome in the face of heightened regional disturbances.

Iran delivered a reliable 6 per cent increase to enter the top 10 rankings as a key source market, with much of the remaining volumes attributable to Egypt and Jordan, each independently registering robust 15 per cent growth versus 2014 for the full year.

Asian markets (excluding the Indian sub-continent) were the next largest regional contributors with a total of 1.2 million travellers to Dubai - a 17.9 per cent increase for 2015 compared to the previous year. With 450,000 Chinese tourists to Dubai last year, inbound traffic from China dominated the uptake from this region, topping the leader board of year-on-year growth trends with a 29 per cent increase in numbers.

The Philippines delivered 325,000 tourists, with a particularly strong third quarter performance raising it to number 11 in the source market rankings.

The Americas brought in just short of 1 million travellers, growing at a healthy 8.2 per cent thanks to the strong airlift and increase in point-to-point routes from both east and west coasts.

His Excellency Almarri explained: "Through 2016 we will continue to leverage increasing airlift, open and streamlined visa policies, and a broad destination appeal that offers something for all travel segments.”

Having rolled out its global brand campaign in the last quarter of 2015, Dubai continues to work on building brand awareness in new markets and addressing perception gaps in existing markets where there is limited market share capture, to better penetrate and attract the fast growing, mass affluent segments as future leisure and business visitors. – TradeArabia News Service