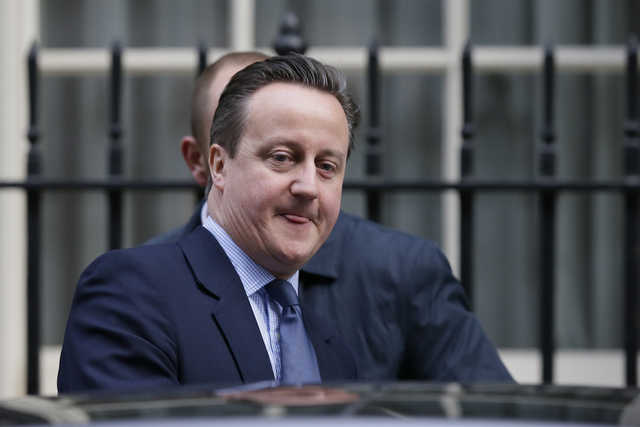 Cameron leaves 10 Downing Street for the House of Commons for a debate on renegotiating UK's EU membership. (AP Photo)

London: Prime Minister David Cameron fended off attacks from eurosceptics and a hostile Press over proposed reforms to keep Britain in the EU that Brussels defended as a "fair" deal for all.

In a heated parliamentary debate, Cameron urged fellow MPs to stand united as he faced vitriol from senior members of his own Conservative Party and a vicious response from several newspapers to the plan.

"Let's fight this together," Cameron told MPs, defending the draft measures put forward by European Council president Donald Tusk on Tuesday that are due to go before all 28 EU leaders.

The measures are part of a plan to avoid Britain becoming the first European Union member to quit the bloc in a referendum that has to be held by 2017 at the latest but is expected within months.

The plans include a four-year "emergency brake" on welfare payments for EU migrant workers, protection for countries that do not use the euro and a "red card" system giving national parliaments more power to veto European regulations.

The reforms add up to "the strongest package we've ever had," Cameron insisted.

"I do believe that with these draft texts and with all the work we've done with our European partners, Britain is getting closer to the decision point," stressed the prime minister.

While Cameron did not offer a timing for the vote, he responded to an appeal by the leaders of Northern Ireland, Scotland and Wales that it not be held on June 23 – a date mooted in the Press.

Regional officials have complained that the date would be too soon after local elections on May 5 but Cameron said that the referendum would be held at least six weeks later as agreed.

At the European parliament in Strasbourg, the head of the EU's executive arm defended the package, hailing it as "fair" for the whole of the 28-member bloc.

"I've always said I wanted the UK to remain a member of the European Union on the basis of the fair deal".

UKIP head Nigel Farage ridiculed the proposals that were "hardly worth the wait" and said Cameron would now "parade in front" of EU leaders for more concessions at a summit in two weeks.

"I find it rather humiliating that a British prime minister has to do this.

In Westminster, the proposals were criticised by traditionally eurosceptic Conservative MPs such as Bill Cash and John Redwood but also by a close political ally of the British leader – London's flamboyant mop-haired mayor Boris Johnson.

"The prime minister is making the best of a bad job," Johnson, who opponents of Britain's EU membership hope will head up their campaign, told Sky News. "We've got a lot more to do on this."

Following Cameron's statement, Tory MP Jacob Rees-Mogg warned his boss that "he has two weeks in which to salvage his reputation as a negotiator."

Redwood earlier asked the prime minister "as we are driven in the EU vehicle towards ever-closer union, how does it help to try and fit a couple of emergency brakes that lie within the control of EU?"

Former defence secretary Liam Fox has warned that up to five members of Cameron's cabinet could campaign to leave the union after seeing the proposals.

The leader of the opposition Labour Party, Jeremy Corbyn, reiterated his party's support for Britain to stay in the bloc and said the debate was a "Tory party drama."

Britain's newspapers on Wednesday heaped scorn on the plans, with popular tabloid The Sun splashing "Who do EU think you are kidding Mr Cameron?" across its front page while The Daily Mail called it "The Great Delusion".

The proposals are also expected to be a hard sell for some EU states that fear Cameron is winning too many concessions ahead of a February 18-19 summit.

Cameron begins a charm offensive that will take him to Poland and Denmark on Friday then Germany next week.

German government spokesman Steffen Seibert on Wednesday called the proposals "an ambitious package", but said Berlin would need more time to review them.

But the battle will be waged at home too, with opinion polls split on whether Britons would back leaving the EU in their first vote on the subject since 1975.

US President Barack Obama waded into the debate on Tuesday, telling Cameron his country was best served inside the EU.

Obama spoke with Cameron by phone and "reaffirmed continued US support for a strong UK in a strong European Union," according to the White House.