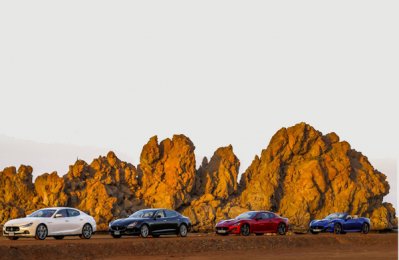 Italian luxury car manufacturer Maserati said it has achieved its fifth consecutive record year in terms of sales across the Middle East, India and Africa (MEIA) region in 2015.

The MEIA region registered a modest increase on the previous year’s annual sales record. The strongest growing markets in the region were the newly re-opened India and South Africa, with a growth of 257 per cent and 154 per cent respectively.

The largest markets in terms of sales volume remain the UAE, Saudi Arabia and Kuwait with triple digit figures registered in each market, said the Italian auto giant.

With regards to models, the brand’s flagship, the Quattroporte, and the GranCabrio open-top sports car showed the strongest growth with 19 and 25 per cent respectively. The Maserati Ghibli sports executive sedan continues to be the luxury marque’s best-selling model, it stated.

Maserati is set to unveil its newest addition to the line-up and first ever luxury SUV, the Maserati Levante, at the 2016 Geneva International Motor Show in March, said its top official.

Umberto Cini, the managing director of Maserati (MEIA), said: "The Levante is undoubtedly the next big milestone in Maserati’s history. Our product portfolio is growing and we have developed in leaps and bounds in terms of quality and reliability, network infrastructure, service offering and customer satisfaction."

"As an exclusive luxury brand, our sales volume is a drop in the automotive ocean - for the entire region together it is in the low four-digit numbers," observed Cini.

"But considering it is 10 times as much as when we first started out in the region in 2006, it’s a phenomenal achievement and a testament to the products and the brand," he added.-TradeArabia News Service