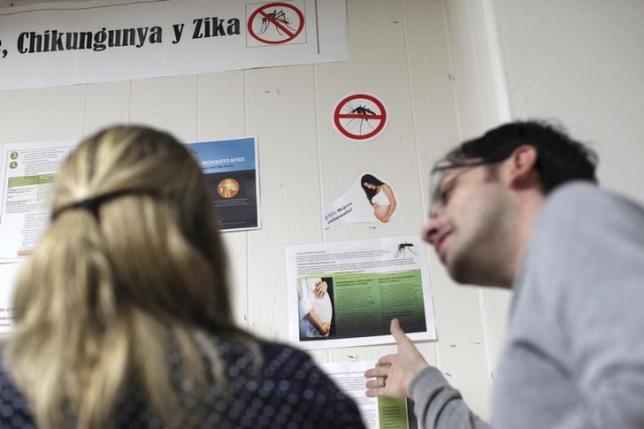 People read information on Zika virus and other mosquito-borne diseases at the Department of Health in San Juan, January 27, 2016. (Reuters Photo)

Washington: New guidelines barring the collection of blood in areas with outbreaks of the mosquito-borne Zika virus will be put to the test first in cash-strapped Puerto Rico, where health officials have two weeks to start importing the island's supply.

Puerto Rico has reported a small number of cases of local transmission, and U.S. health officials expect many thousands of residents to be infected once the mosquito season reaches its peak this summer.

Local health officials fear switching to imports could undermine the island's voluntary donation network, which provides the bulk of its needs.

The new guidelines will require Puerto Rico to obtain its entire supply from the continental United States at a cost of up to $100,000 a week, said Jose O. Alsina, vice president and chief operating officer of Puerto Rico's Banco de Sangre de Servicios Mutuos, the island's largest blood bank.

The U.S. territory is struggling with about $70 billion in debt and a 45 percent poverty rate. The island has already defaulted on some debt payments and its Governor Alejandro Garcia Padilla has warned that the government is close to running out of money.

Alsina said its eight blood banks can't afford to buy blood and make payroll, which includes about 400 drivers, phlebotomists, nurses and others.

Blood bank officials are asking the government to help pay for the imports so they can maintain their infrastructure until local collection can resume.

They also have asked for extra time to collect blood locally before having to import it all.

"Laying off people, even for a short time, would be devastating," Alsina said.

The FDA said that it recognized the new rules would create hardships but stressed they were necessary to ensure safety. The Zika virus has been found in blood, and experts are concerned about the possibility that it could be transmitted through transfusion.

The FDA "is actively engaged in conversations with local health authorities and blood collection establishments in Puerto Rico in order to minimize the impact to the greatest extent possible," said agency spokeswoman Tara Goodin.

The Zika outbreak began in Brazil last year and has spread rapidly through the Americas. The World Health Organization declared it a global health emergency earlier this month because the virus is suspected of causing microcephaly, a birth defect marked by unusually small heads that can cause developmental disabilities.

Dr. Thomas Frieden, director of the U.S. Centers for Disease Control and Prevention, has told lawmakers some of the funds should finance the development of a blood screening test that he hoped could be available in six to 12 months.

In the meantime, researchers at the Blood Systems Research Institute (BSRI), a unit of the blood and transfusion services company Blood Systems Inc, are evaluating the possibility of refining an existing Zika test to temporarily screen blood from Puerto Rico.

The test was developed nearly a decade ago by the CDC and has been used mainly for research purposes. Dr. Michael Busch, director of the BSRI said he believes his institute could refine the test and screen the Puerto Rican blood supply until a commercial test becomes available later this year.

Busch said the institute is in discussions with the FDA and believes it could scale up capacity to test Puerto Rican blood donations and submit an application for approval by the end of March.

The CDC test could screen the average amount of blood Puerto Rico uses per week but not much more, Busch said.

The U.S. Virgin Islands and American Samoa also have been identified by CDC as areas with active Zika transmission, but both already import their blood supply from the continental United States and Hawaii, respectively, the FDA said.

The further the virus spreads, the greater the area that will need to be supplied by Zika-free regions of the country, potentially squeezing overall blood supply.

OneBlood, which collects most of the blood used in Florida, said it will implement a screening test as soon as one is authorized by the FDA. The organization is in "close contact" with the FDA, CDC and Florida Department of health "should additional measures be needed," said spokesman Pat Michaels.