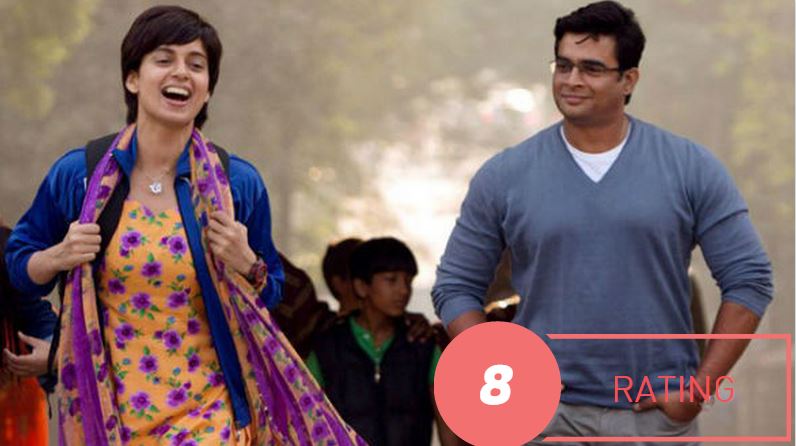 The Queen of Bollywood is back, this time it’s a double treat for fans of Kangana Ranaut as she has two roles in in 'Tanu Weds Manu Returns'. If you thought she was brilliant as Tanu, you will fall off your chair laughing after watching her play athlete Datto. Her Haryanvi accent is the show stealer. You can’t stop laughing whenever Datto is on the screen. She carries the film with ease and you can’t imagine it without her.

When Tanu Weds Manu released in 2011 there weren’t high expectations for the movie, but to everyone’s surprise it went on to become a blockbuster.  Now the movie has hit the silver screen does it live up to expectations triggered by its trailer? We say, yes. If you loved the first film, you are going to have the double amount of fun in this follow-up.

Rai’s execution of the fun script is laudable. He has proved once again that you don’t always need flying cars and goon fights to entertain the audience. A simple script, with funny punches and interesting characters, is all you need to make a Bollywood popcorn film entertaining. Pardon him for a few minutes in the second half which has a few unnecessary lengthy sequences, because the movie is otherwise entertaining and will tickle your funny bone.

The film has an interesting start and every married couple is likely to relate to it. Tanu (Kangana Ranaut) and Manu (R Madhavan) are bored of their marriage after just four years and reach out to a psychiatric hospital to save their relationship. “I love him, but I don’t like him,” Tanu tells doctors at the facility in the UK. Calm and composed Manu, who is also a doctor by profession, tries to explain to doctors that his wife suffers from a bipolar disorder, as it’s hard to understand her reactions.

But doctors retort that every woman must suffer from the same disorder if that is the case and eventually he is committed for his aggressive behaviour. However, both Tanu and Manu eventually return to India where the latter meets Haryanvi athlete Datto, who is a lookalike of Tanu, and falls in love with her.

Manu is also adorable in the film. One scene in which Tanu shouts at him for marrying other girl, as he stands with a plate of food, is fun to watch. His chemistry with Datto is extremely funny and entertaining.

He might not have a chiselled body or a mass fan following unlike other Bollywood stars, but he is a treat to watch on the big screen. Deepak Dobriyal as Pappi is also a true show-stealer who is bound to entertain. Tanu Weds Manu Returns is light at heart AND a humorous romcom. It will make you laugh! Go for it.