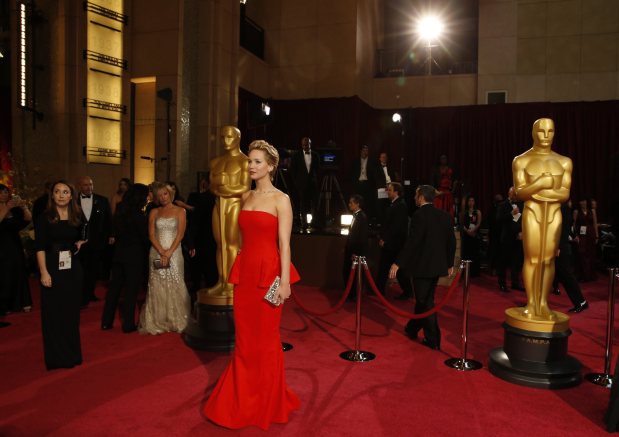 According to Forbes, the 25-year-old actress pulled in an estimated $52 million pre-tax between June 2014 and June 2015. That amount was more than enough to make her the highest-paid actress in Hollywood.

"The Revenant" star Leonardo DiCaprio is runner-up with $29 million. Matt Damon -- up for best actor -- is the only other Oscar nominee who made the magazine's list of highest-paid actors, having earned $25 million.

Last October, Lawrence addressed the fact that she was getting paid less than her male co-stars working on "American Hustle."

"When the Sony hack happened and I found out how much less I was being paid than the lucky people with dicks, I didn't get mad at Sony. I got mad at myself," she wrote in an essay about Hollywood's wage gap for her friend Lena Dunham's Lenny Letter newsletter.

"I failed as a negotiator because I gave up early. I didn't want to keep fighting over millions of dollars that, frankly, due to two franchises, I don't need."

Lawrence is nominated for her role as entrepreneur Joy Mangano in the David O. Russell dramedy "Joy." She is competing in the best actress category with Cate Blanchett, Charlotte Rampling, Saoirse Ronan and Brie Larson.

Sandra Bullock was the last actress to rank at the top of the Forbes list and earn an Academy Award nomination in such a close time frame. She was nominated for "Gravity" in 2014 -- the same year she went on to bank $51 million.

Although Lawrence earned more this year than actors like Bradley Cooper and Vin Diesel, she was bested by Marvel star Robert Downey Jr. The man who plays Iron Man earned $80 million for his work on projects like "Avengers: Age of Ultron."