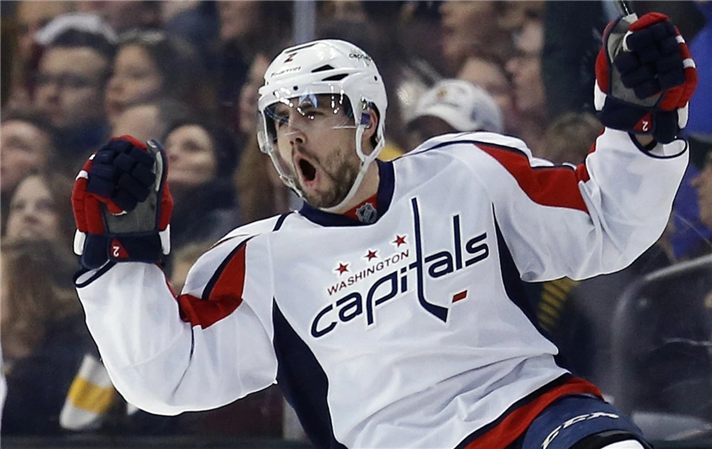 Boston: Washington's Matt Niskanen scored in overtime to give the NHL's top team a 2-1 win at Boston on Saturday, frustrating the Bruins ambitions to get to the top of the Atlantic Division.

The Bruins went into the day knowing they could take a share of the Atlantic lead if they won and the teams above them, Tampa Bay and Florida, both lost.

Instead, Tampa Bay won in overtime against Carolina to extend its winning streak to a team-record nine games and move two points clear of Florida atop the division, with the Bruins a point behind the Panthers.

A divisional lead was also at stake when Anaheim beat local rival Los Angeles to move two points above the Kings atop the Pacific Division.

In another key result, Nashville boosted its playoff hopes by winning comfortably at Colorado. The Predators have either won or taken a point by forcing overtime in 12 successive games.

Washington was coming off a loss to the New York Rangers the previous night but, in keeping with its record of only losing back-to-back twice this season, they found a way to come out on top.

Tampa Bay's Alex Killorn scored with 42.5 seconds left in overtime to give the Lightning a 4-3 win against Carolina.

Ondrej Palat had two goals for the Lightning, who broke the old record of eight wins in a row from 2004 when it won its lone Stanley Cup. Tyler Johnson had the other Tampa Bay goal, tying the score with 6:18 remaining in regulation.

Anaheim kept up its remarkable surge since the New Year, beating Los Angeles 3-2 to take sole possession of the Pacific lead.

David Perron scored the go-ahead power-play goal in the second period for the Ducks, who trailed the Kings by 16 points on Jan. 20. Anaheim has gone 18-1-1 since and Los Angeles 9-9-1.

The Ducks, trying to win a fourth straight division title, have won 11 of the past 14 regular-season meetings with their rival.

James Neal tied the game 62 seconds into the final period, and Mike Fisher took advantage of Colorado's inability to clear the puck by knocking a shot past Calvin Pickard with 9:44 remaining. Shea Weber and Miikka Salomaki added empty-netters.

Filip Forsberg scored in the second period for his 18th goal in 2016, while goalie Pekka Rinne stopped 34 shots.

Blake Comeau and Gabriel Landeskog scored for the Avalanche.

Arizona's Alex Tanguay scored twice and added an assist in his Coyotes debut, helping the team cruise past Florida 5-1.

Antoine Vermette had a goal and three assists while Shane Doan and Jordan Martinook also scored for Arizona, which had lost its previous seven games.

Vancouver continued its run of good results at San Jose, winning 4-2 to make it five successive wins on the Sharks' home ice.

Linden Vey and Daniel Sedin also scored power-play goals and Alexandre Burrows sealed it with an empty-netter for the Canucks.

The Canucks lost star Henrik Sedin to an upper-body injury in the first period.

Michael Haley and Brent Burns scored for the Sharks.

Minnesota's Jason Pominville scored in the fourth round of the shootout to give the Wild a 3-2 win at Buffalo; their fourth straight victory.

Philadelphia crushed Columbus 6-0 to move within three points of the playoff place, with the highlight being a 91-foot goal by Radko Gudas.

Calgary snapped a seven-game losing slump with a 4-2 win at Pittsburgh, recording their first road win against the Penuins in more than a decade.

Ottawa won 3-2 at Toronto in a game that marked the return of new Senators signing Dion Phaneuf after seven seasons with the Maple Leafs.