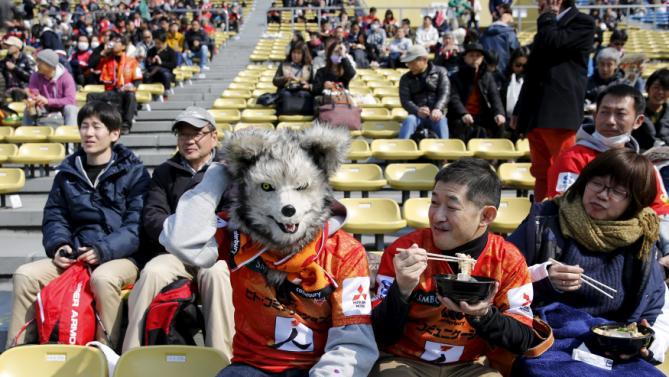 Fans of Sunwolves pose for a photo before a match against Lions. (Reuters Photo)

Singapore: Fledgling Japanese outfit the Sunwolves have benefited from the bonus preparation time of last week's bye week, their defiant head coach Mark Hammett said on Friday, amid continued debate about their readiness for the high demands of Super Rugby.

The Sunwolves, affected by player and coach recruitment problems and a short pre-season, opened their campaign with a 26-13 loss to the Lions a fortnight ago, where a brave display was undone by inferior physicality and set piece deficiencies.

One New Zealand columnist was quick to suggest after the defeat in Tokyo that tournament organisers SANZAAR should pull the plug on the franchise with the assignment only likely to get tougher over the first of a contracted next five seasons.

Next up on Saturday is a clash with the Cheetahs of Bloemfontein in hot and humid Singapore, with former New Zealand international Hammett offering short shrift to discussions about inadequate preparations.

"As a team we are about realism and what we need to achieve and the media is about sensationalism," he told reporters at the National Stadium.

"It's great. It's really, really important and gets people into watch. (But) we are just trying to build a good franchise."

With just four weeks preparation, which were affected by Hammett flying home after the death of his mother last month, the early bye was welcome for a new squad shorn of the best Japanese talent and aided by journeymen foreign recruits.

"You have to remember that gave us 25 per cent more of a pre-season than what we had so from that respect it has probably been good for us," said the head coach, who named an unchanged lineup to face the perennial strugglers, who lost their first two matches at home.

Sunwolves experienced Samoan flyhalf Tusi Pisi, who was sin-binned in the Lions loss, said there could be no excuses for his side in the first of three home-away-from-home matches to be played in Singapore this season.

"I know we had a short pre-season but we have really worked hard mingling with each other and trying to get everyone settled in as a team," the 33-year-old said.

"Come tomorrow (Saturday), there is no excuses about communication or short preparation its just about going out there and execute what we train. That's the bottom line."

Sunwolves skipper Shota Horie did say, however, the sweaty temperatures in the Southeast Asian city-state, which reached 35 degrees Celsius (95 Fahrenheit) on Friday, was something of a shock.

"It is very hot weather here and we came from a very cold winter, so struggling a little bit," said the hooker, who scored the Sunwolves first ever try.