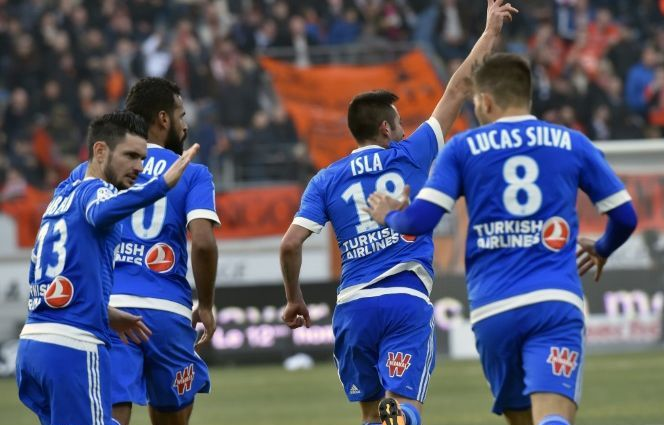 Marseille's midfielder Mauricio Anibal Isla (C) celebrates with teammates after scoring a goal during a French L1 football match against Lorient on Mar 12, 2016 at the Moustoir stadium in Lorient, western France. (AFP Photo)

Paris: Marseille lost more ground in their bid to play in Europe next season as a 1-1 draw at Lorient on Saturday extended their winless run in Ligue 1 to six matches.

Majeed Waris struck the opener on 34 minutes at the Stade du Moustoir as Walib Mesloub slipped in the Ghana striker to steer the ball beyond Steve Mandanda for his fourth goal in three games.

But Chile international Mauricio Isla levelled for Marseille immediately after half-time as he fired through the legs of Lorient goalkeeper Benjamin Lecomte from a narrow angle.

Mandanda was again superb in the Marseille goal, making a string of fine stops to keep the visitors in the game as OM drew 1-1 for the fifth straight outing.

"I'm not concerned, I'm annoyed, it's different. When you're the coach it's difficult because you have to respect the players and not say too much," raged Michel afterwards.

"But I think now is the time where my players must learn about the club's history, because after Waris scored our performance was a disgrace.

"The results we've had aren't by coincidence, everyone must face up to their responsibilities, including me," he added.

Marseille have lost just once in their last 17 league matches, but Michel's side have won just four games in that timeframe and are still six points behind fourth-place Lyon, who are in action at Rennes on Sunday and occupy what is currently the final European spot.

Saint-Etienne's top-three push was dealt a blow though as they were soundly beaten 2-0 at Guingamp with Caen also suffering a costly 1-0 defeat at relegation-threatened Gazelec Ajaccio.

Lille notched just a second away win of the season as they edged past Bastia 2-1, while Toulouse boosted their slim survival hopes with a thumping 4-0 victory over 10-man Bordeaux.

Paris Saint-Germain can clinch a fourth consecutive Ligue 1 title on Sunday with victory away to bottom side Troyes after Monaco were held 2-2 at home to Reims on Friday.

Vagner Love twice put Monaco ahead at the Stade Louis II but Reims responded both times with goals from Gaetan Charbonnier and Diego to pave the way for PSG to wrap up the championship in record time.

Lyon will also look to capitalise on Monaco's slip-up and pull to within four points in the race for France's second automatic Champions League qualifying berth when they visit Roazhon Park.