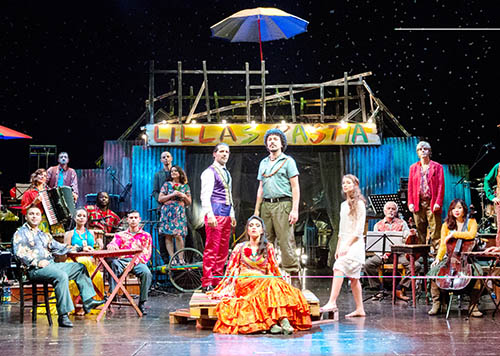 A CONTEMPORARY take on one of the world’s most popular operas takes place tomorrow night in Bahrain.

L’Orchestra di Piazza Vittorio’s Carmen Secondo will be performed at Arad Fort at 8.30pm as part of this year’s Spring of Culture festival.

Artistic director Mario Tronco spoke to the GDN ahead of the show to explain the unique twist he has on the tale.

“This is Carmen by a different kind of orchestra. Ours is not a normal orchestra because it is made up of musicians from all over the world,” he said.

“These are musicians who have chosen to spend their lives in Rome.

“It means that the project isn’t just a music project, it’s also a social project because it touches on issues of immigration.

“This makes the orchestra peculiar as well because it’s a set of different instruments that don’t usually play together.

“The opera is also a different version because the instrumental parts are not from the original oeuvre in particular.

Mr Tronco said the orchestra and singers are on the same level, so that the musicians become characters in the show and put on costumes.

“The plot is the same as George Bizet’s (original) Carmen, but the characterisation makes it different.

“We imagined a caravan of immigrants that move from afar and are at the city wall. At the top of the wall are a couple who are hiding to sneak a moment.

“But at a certain point, they see the immigrants’ caravan and Carmen and Don José and they start living the same story they see and transform into the story.

“They first try to make sure that the tragedy doesn’t happen, but at the end, it does.

“It’s a contemporary story, because even if we have had a lot of progress in nations and conquered rights for women, the feminist struggle is still ongoing – it’s always the same, the woman is killed by the man.”

Mr Tronco said that one of the unique aspects of the performance is that the actors and musicians in the show perform in their own language.

“That’s why we’re sharing the story of Carmen by using an orchestra of immigrants, which is a pressing social issue at the moment and makes this more important,” he said.

“Another difference in our play is that each character is performed in that actor’s language – so Don José is Brazilian and sings in Portuguese, our Escamillo is Tunisian and sings in Arabic,

“The orchestra has been around for 14 years and we’ve done two versions of Carmen.

“This second version is very different to the first one which had a classical orchestra as well and was done in France.

“Carmen is made up of 22 musicians and three dancers and the opera is one act long lasting 90 minutes.

“We decided to condense it because it’s a well-known opera and everyone knows she dies at the end.”

Bahrain’s crowds will witness the multinational artists transform their variegated roots and cultures into one single language, music.

Produced by Accademia Filarmonica Romana, Vagabundos and Teatro Olimpico, the show is in Italian but will feature English subtitles.

The annual festival runs until April 25 and is organised by the Bahrain Authority for Culture and Antiquities and the Economic Development Board.