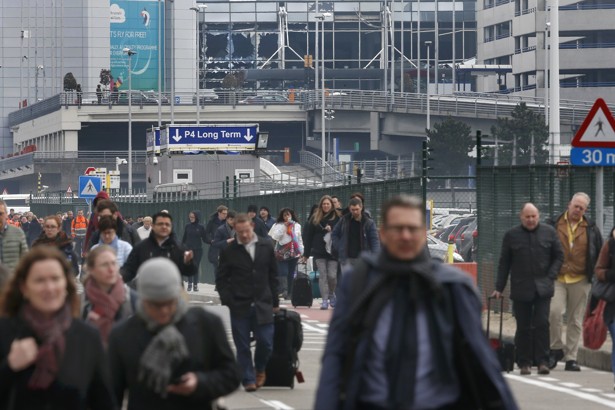 Brussels airport will remain closed until 6am on Wednesday and Eurostar has suspended trains to and from Brussels Midi station. (Reuters Photo0

Brussels: A series of bomb blast rocked Brussels on Tuesday morning, with two blasts at the city’s Zaventem airport and another at a metro station in the heart of the EU quarter an hour later.

The first two explosions ripped through the departure hall at the airport killing at least 13 people, and injuring 35 others.

Shortly after an hour, another blast hit a metro carriage at Maalbeek station where at least 15 people have been reported dead so far.

Zaventem Airport has been shut and flights have been diverted.

All trains, planes, trams and buses were halted in Brussels, reported daily Independent.

The Belgian federal prosecutor said the airport explosion was a suicide attack.

Brussels airport will remain closed until 6am on Wednesday.

Eurostar has suspended trains to and from Brussels Midi station.

The Belgian government has put the country on the highest alert following the explosions.

No one has so far claimed responsibility for the attacks on Tuesday.

Prime Minister Charles Michel also said it was ‘dark moment for our country.’

Belgium’s interior minister Jan Jambon had warned that jihadis could be looking for a way to counter-attack after the arrest last week of Salah Abdeslam, a suspected participant in November’s Paris attacks.

David Cameron is to chair a meeting of the UK government’s emergency committee, Cobra. Cameron and other world leaders have expressed their shock and support on Twitter.

I will be chairing a COBRA meeting on the events in Brussels later this morning.