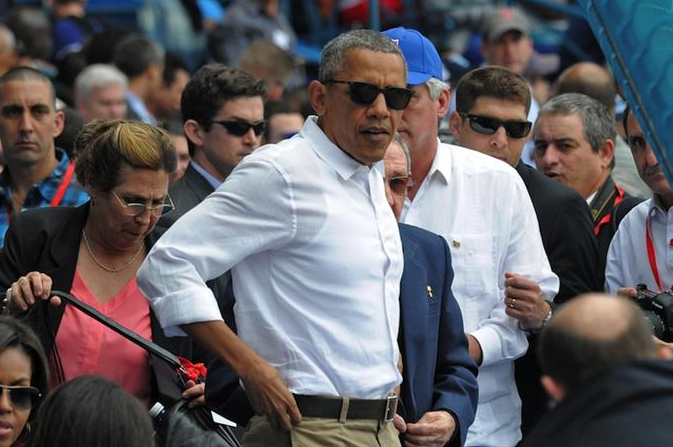 Havana: US President Barack Obama told Cubans he wants to "bury" decades of Cold War conflict and then joined his counterpart Raul Castro for some baseball diplomacy to wrap up his historic visit to the communist island.

Speaking from Havana's ornate Gran Teatro, Obama – the first US president to visit Cuba in 88 years – thrilled Cubans with a call for democracy and greater freedom of expression.

"I have come here to bury the last remnant of the Cold War in the Americas," Obama said to cheers during his unprecedented speech, carried live on Cuba's tightly controlled state television.

There were extraordinary scenes of clapping and cheering as Obama laid out his vision for change in the one-party state and close US-Cuban relations.

"Creo en el pueblo cubano," he said, repeating himself in English: "I believe in the Cuban people."

But Castro, sitting in a theatre box with other high-ranking officials, sat stone-faced as Obama said: "Voters should be able to choose their governments in free and democratic elections."

Cubans watching at home or in bars were enthusiastic.

"I think Obama touched the soul of the Cubans," said dockyard worker Lazaro Bosch, 62. "Obama is a man of ideas, with very clear thoughts, and I think he really wants to push for a new relationship."

Immediately after the speech, Obama left to meet with dissidents who have been harassed and sometimes arrested under Castro's rule including Berta Soler, the leader of the Ladies in White, and veteran activist Elizardo Sanchez.

Obama drew some of the loudest applause of his speech when he called on the US Congress to lift a decades-old economic embargo.

The sanctions were imposed in a failed attempt to break the communist regime that came to power after Raul's brother Fidel Castro overthrew a widely hated, US-backed government in 1959, and then made Cuba a fierce Soviet ally.

"It is an outdated burden on the Cuban people. It's a burden on the Americans who want to work and do business or invest here in Cuba," Obama said. "It's time to lift the embargo."

Rebuking domestic critics who say that the opening to Cuba has given away too much while doing little to force Castro to change, Obama said the embargo simply "was not working."

"We have to have the courage to acknowledge that truth," he said. "The embargo was only hurting the Cuban people instead of helping them."

But despite the charm offensive, which included references to the countries' shared enthusiasm for baseball and Cuban singers, Obama's speech was laced with stinging critiques of Castro's control over the Caribbean island of about 11 million people.

"I believe citizens should be free to speak their minds without fear, to organise and to criticise their government," Obama said.

The repeated references to human rights and free elections may not have pleased Castro, who at one point simply turned away and began chatting to his foreign minister, but they created a sensation in much of the rest of the cheering audience.

Castro's only visible applause during the speech came when Obama referred to lifting the embargo and when he praised the late South African president Nelson Mandela.

Obama and Castro have been careful to highlight their rapprochement during the US president's three-day trip, which ended with a bit of baseball diplomacy – a friendly game between the Cuban national team and Major League's Tampa Bay Rays, symbolising the countries' shared passion for the sport.

Obama and Castro sat side by side, tieless and wearing sunglasses, for the game, which began with a spine-tingling rendition of both national anthems.

Obama then left on Air Force One for a visit to Argentina. Castro, who had not been there to greet Obama when he arrived Sunday, saw the US president off at the airport, with a warm farewell.

However, tension over the human rights issue illustrated that what Castro called "profound" differences remain.

At a joint Press conference on Monday, Castro angrily denied that Cuba holds any political prisoners. He attacked the US, saying rights there were also violated when it came to healthcare, social security, and "double standards."

Castro also said that Washington needs to return sovereignty over Guantanamo, a corner of Cuba under US control and the location for a controversial US military prison housing foreigners allegedly involved in terrorism.

Republican critics back home accuse Obama of playing too soft a hand. After his meeting with opposition members, the party's national committee called the Havana visit "an embarrassing display of weakness and lack of moral clarity."