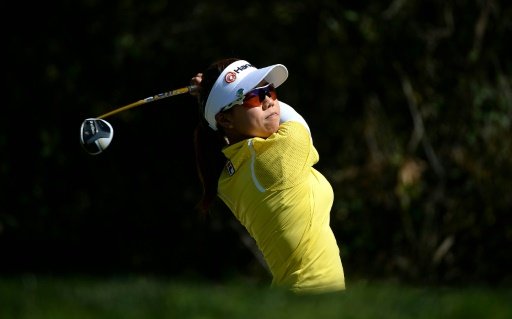 Jenny Shin tees off the 9th hole during Round Two of the KIA Classic in Carlsbad, California. (AFP Photo)

Carlsbad: Jenny Shin fired a 65 to take the halfway lead at the Kia Classic Friday and she's hoping a victory this week could land her a full-time caddie.

Shin, who is aiming for her first win on the LPGA Tour, asked James Walton to carry her bag, but the veteran caddie has no shortage of suitors seeking his expert services.

Shin's bogey-free round moved her to 10-under overall and a one stroke lead heading into the weekend at the Aviara Golf Club course.

"I think it was a really good round. I hit great shots. I hit great putts. I had a lot of six-footers for birdie, so it was a good day," said Shin, who grew up in the Los Angeles area but usually labours in front of family and friends.

"This is the only tournament every year where I struggle to get in contention," said Shin.

"It's close to home with a lot of people watching. Last year, my coach came out and watched me for two days. So it was just a lot of pressure. This year, I didn't invite anybody, just my mom."

Shin has worked with Walton twice before in 2012 and 2013 with the combo leading to top five finishes both times. Walton has also caddied for Billy Mayfair, Y.E. Yang and Robert Karlsson on the PGA Tour.

"He does a really good job with course management and he helped me quite a bit today and yesterday," said Shin, who has a 36-hole lead for just the third time in her career.

Walton and Shin will be together for next week's first major of the year, the ANA Inspiration.

Kiwi Lydia Ko and Brittany Lang were tied for second after shooting 67 and 68 respectively.

Park In-Bee is tied for fourth at eight-under par along with Kim Hyo-Joo who shot a second round six-under par, 66.

Tied for sixth is Jessica Korda and Park Sung-Hyun at seven-under par.

Defending champ Cristie Kerr missed the cut along with Kim Sei-Young who failed to reach the weekend action for just the third time in her career.