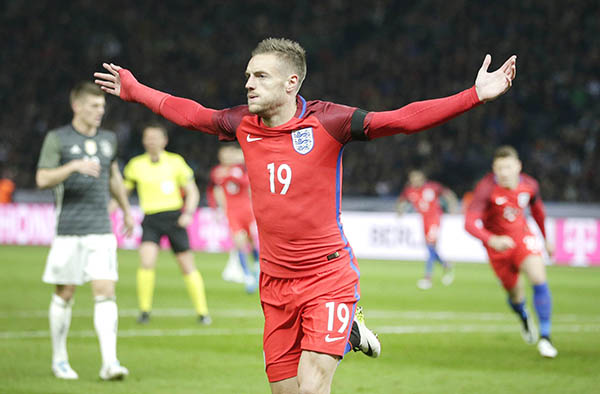 BERLIN: Substitute Jamie Vardy scored with a cheeky flick, his first international goal, and Eric Dier headed a last-gasp winner as England hit back from two goals down to beat Germany 3-2 in a friendly between the two Euro 2016 finalists early this morning.

Vardy managed to half-volley behind his standing foot to send the ball flying between Germany goalkeeper Manuel Neuer and his near post from Nathaniel Clyne’s cross in the 74th minute to level the match.

Then Dier rose above the Germany defence to head the winner from Jordan Henderson’s corner in the 91st minute.

Harry Kane begin the fightback with a superbly taken effort just after the hour after Toni Kroos and Mario Gomez had scored either side of halftime, somewhat against the run of play, to put the hosts in the driving seat. Gomez’s goal was his first for Germany since Euro 2012.

Earlier, Brazilian-born goalkeeper Guilherme made history when he went on as a halftime substitute in Russia’s 3-0 friendly victory over Lithuania.

The Lokomotiv Moscow stopper became the first player born outside of Russia to represent the national team when he replaced Stanislav Kritsyuk.

The 30-year-old Guilherme, who received his Russian passport last year, had little to do as the European Championship finalists eased to a comfortable win.

Fedor Smolov scored five minutes before halftime while Alexander Golovin and Denis Glushakov were on target after the break for Leonid Slutskiy’s side.

Coach Slutskiy named a largely experiential lineup with only Sergei Ignashevich and Igor Smolnikov likely to start their first Euro 2016 game against England in Marseille on June 11.

Smolov was given a chance to stake his claim for a place at the finals in France and the Krasnodar forward impressed in a 45-minute outing.

He broke the deadlock in the 40th minute with an excellent left-foot finish beyond keeper Vytautas Cerniauskas after being sent clear by Dmitri Tarasov’s pass. It was Smolov’s fifth goal on his 11th international appearance.

Substitute Golovin then made it 2-0 after pouncing on a knock-down from Alexander Kerzhakov.

Glushakov made sure of the win when he headed the ball in at the near post following a corner. Lithuania failed to qualify for Euro 2016.