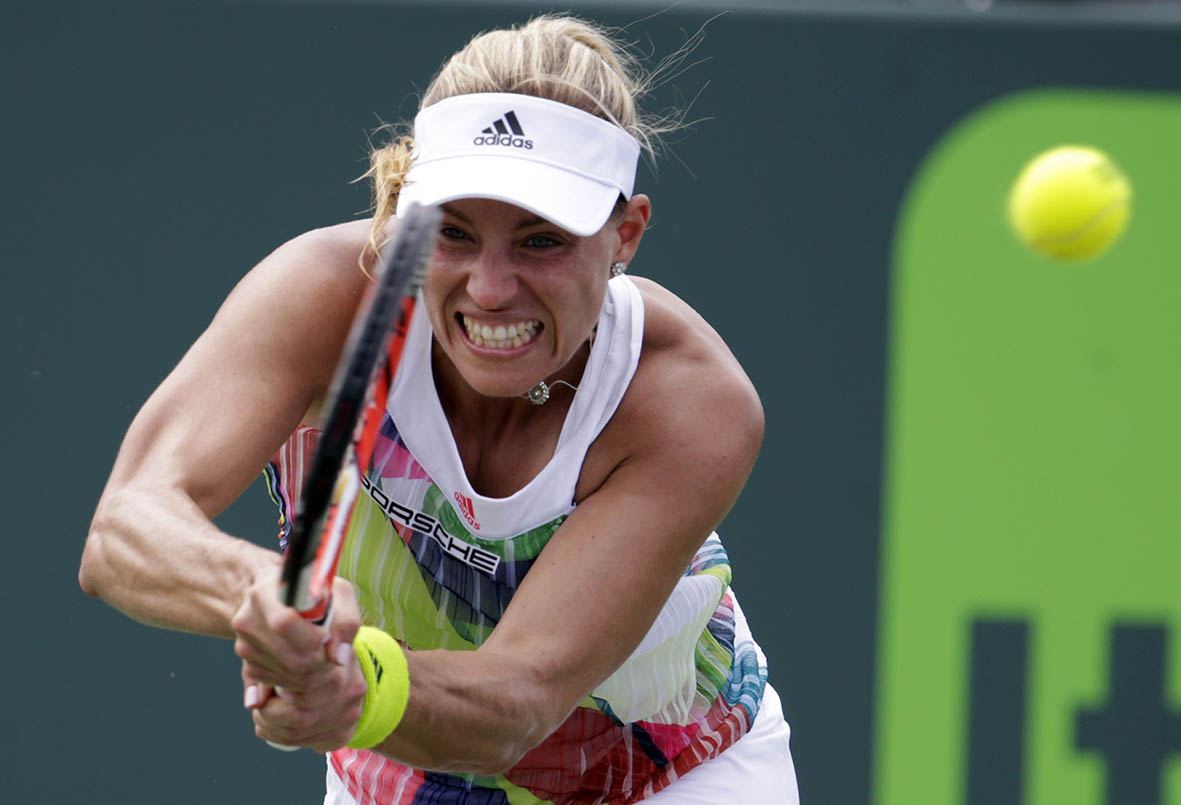 Kerber returns a shot to Bertens

The German second seed, who upset top-ranked Serena Williams two months ago at Melbourne for her first Grand Slam title, was leading 1-6, 6-2, 3-0 when Bertens met her at the net and said she could not continue.

"I was not finding a rhythm at the beginning of the match," Kerber said. "I had to stay strong, believe and keep fighting. I hope she gets well soon but I'm glad to be in the next round."

Kerber next faces Hungary's 49th-ranked Timea Babos, who ousted 18-year-old Japanese 104th-ranked wildcard Naomi Osaka 7-5, 6-0. Kerber is 3-0 against Babos, with 2012 wins at Cincinnati and the London Olympics and another in last year's first round of the French Open.

The 28-year-old left-hander became the first German woman to win a Slam crown since Steffi Graf in 1999 at Wimbledon, but since then Kerber had lost opening matches at Doha and Indian Wells after withdrawing from Doha with a right thigh injury.

After exchanging breaks to open, Bertens broke Kerber twice more – when the German swatted a forehand wide and on her own backhand drop volley winner – then held to claim the first set in 31 minutes.

Kerber held to 3-2 in the second set when Bertens called for a trainer to help combat the heat and stomach pain. Bertens fought on but Kerber won the next six games before her rival retired.

The 26-year-old from Belarus is trying to become only the third woman to sweep the Indian Wells-Miami US double after Graf in 1994 and 1996 and Kim Clijsters in 2005.

Azarenka hit a backhand winner to break for the first set, then saved two break points in an 11-minute opening game of the second set and breezed to victory from there.

"I won the first set and I took the energy and I stayed on top," Azarenka said.

Argentina's Horacio Zeballos, a lucky loser who replaced Roger Federer in the draw when the 17-time Grand Slam champion withdrew due to illness, advanced to the fourth round, rallying to beat Spain's Fernando Verdasco 1-6, 6-4, 7-6 (7/4).

Zeballos, ranked 112th, had not won a match since last July before beating countryman Juan Martin Del Potro in the second round. He will face Belgian 15th seed David Goffin on Tuesday for a quarter-final berth.

Two-time defending champion Djokovic, who won his 11th Grand Slam crown at the Australian Open two months ago, first must get past Portugal's 38th-ranked Joao Sousa in a later match at the hardcourt event.

Djokovic, trying to match Andre Agassi's record of six career Miami crowns, has won 11 Miami matches in a row and 25 of his past 26 matches at the venue, the only loss in the span coming to Tommy Haas in 2013.